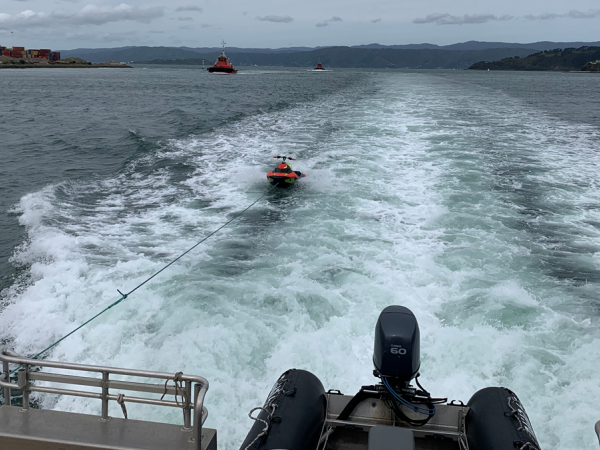 Home > News > Rescue shows value of being equipped out on water

Two men were rescued today by the Police Maritime Unit on board the Lady Elizabeth IV after they were thrown from their jetski in Wellington Harbour.

The pair were traveling from Petone beach to Wellington when they hit a wave and both were flung from the jetski into the 13°C water.

Both were wearing lifejackets but the jetski began to be blown away from them in the 25-knot wind. One of the men swam after the jetski but was unable to catch it.

They then regrouped and decided to swim for shore, about 1.5km away.

Fortunately, one of the men had a mobile phone which was water resistant and he called Police after half an hour in the water.

A mayday relay was broadcast and a search was conducted by Police with the help of the Centreport harbour pilot boat, two tug boats (Tapuhi and Tiaki) and Coastguard.

The two men were pulled from the water a short time later. One was treated for hypothermia symptoms.

Senior Constable Kyle Smith of the Wellington Maritime Unit says it's lucky the pair were prepared.

"It's situations like this that show just how important it is to wear a life jacket when you're out on the water, and ideally you should have two forms of waterproof communication devices such as a handheld VHF radio, a mobile phone in a waterproof case, a personal locater beacon or EPIRB, or a rocket or smoke flares.

"Without lifejackets and waterproof comms, it could have been a very different outcome for these two today."

Police would like to thank all those who assisted with the search.

The Queen Elizabeth IV tows a recovered jetski behind it in the water. PNG - 1MB
Previous
Update: Missing person, Fielding
Next
Arrive alive these holidays – if you’re drinking, don’t drive