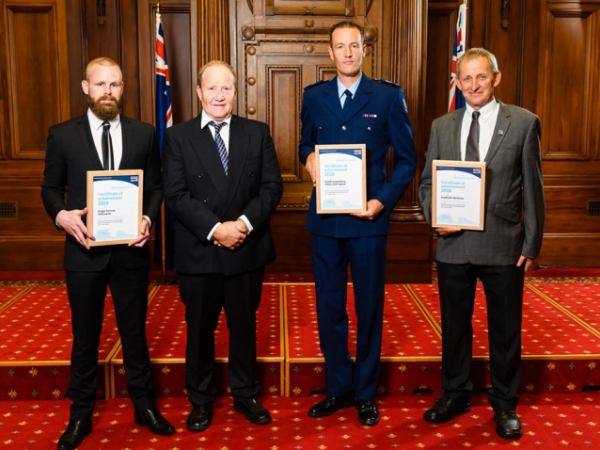 The South Canterbury Police Search and Rescue team, alongside Otago Air Rescue and LandSAR Methven, last night [May 1] received a certificate of achievement for its successful rescue of an injured tramper on Little Mount Peel, north of Geraldine.

In the early afternoon of 3 June 2018, a walker on Little Mount Peel fell and broke her leg. She contacted Ambulance for assistance.

An Otago Air Rescue helicopter was dispatched, but due to deteriorating weather conditions Police were called to assist with a stretcher carry.

Five Police SAR staff were deployed to the scene, along with 16 Land SAR volunteers from Methven and Timaru.

A paramedic and three of the Police SAR staff were dropped near the injured walker while the two remaining officers coordinated with volunteers at the base of the mountain.

“Then cloud and fog moved in, leaving the helicopter unable to drop Land Search and Rescue volunteers near the group already on the mountain. Instead, the Land SAR volunteers walked the Deer Spur Track to meet the paramedic and Police and provide support.

“They finally walked out about 11 hours after the initial call, and the walker was taken to hospital for treatment.”

The NZ Search and Rescue Awards praised the expert piloting skills and the medical capability of the Otago Rescue Helicopter team, alongside the efforts of the land teams. It said that without the expertise of those involved the rescue would have been significantly longer and more painful for the injured tramper.

Caption: Senior Sergeant Antony Callon (in uniform) accepting the award with other members of the rescue operation