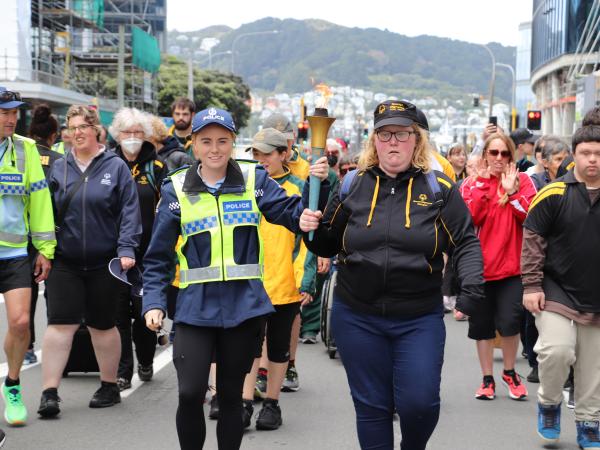 Waikato District police will join some of the region’s Special Olympics athletes on Thursday 8 December to carry the Special Olympics Flame of Hope for the final time and celebrate the start of the Summer Games.

Athletes, supporters, Police and some police dogs will meet and assemble at Hamilton Central Police Station, 12 Anzac Parade at 9.45am and then walk across Garden Place in the Hamilton CBD to Civic Square to be greeted by Mayor Paula Southgate.

The Law Enforcement Torch Run (LETR) has seen torches relayed from each end of New Zealand to Hamilton – the venue for the 2022 Special Olympics National Summer Games.

“The support of the New Zealand Police and other service personnel is hugely valued and we look forward to taking to the streets with them as we move throughout the country and start the games officially,” Special Olympics chief executive Carolyn Young says.

“The LETR is one of the highlights of major Special Olympics events, and this year we are excited that the torches will travel to regions and clubs taking part in the National Summer Games.”

“Once again we are delighted to be able to support the build-up to the National Summer Games. Law enforcement staff are proud to run alongside the athletes through our communities as the Flame of Hope makes its way to the Games in Hamilton.

"The Flame represents so much of what policing is about – it stands for hope, courage, opportunity, inspiration and equality,” Harrison added.

Wellington athletes ran the torch last weekend and you can read about it here: A symbol of hope

Similar in style to the Olympic torch relay, the LETR is a series of runs that raise awareness for the Special Olympics movement.

Media are invited to attend the Hamilton LETR and Games opening to take photos and interview participants, including some of the local Special Olympics stars.