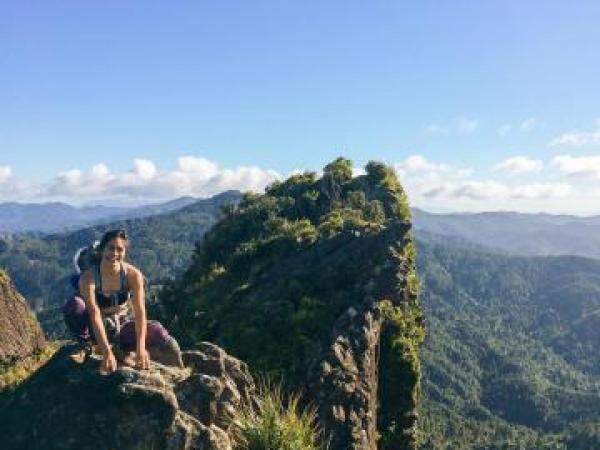 NZ Police are releasing the following statement on behalf of Lauren "Kimi" Worrell, who died on 19 August 2018 at Castle Rock.  Kimi's family have also provided the attached photo for media use.

Lauren “Kimi” Worrell was a 28-year-old American living in Auckland. She'd just finished her Masters degree from the University of Auckland, getting an A+ on her thesis “New Directions for Sustainable Transport Policy in Auckland”, an area in which she intended on working. She was an avid outdoors enthusiast and rock-climber.   Kimi passed away on 19 August 2018 whilst preparing to descend a challenging 120m rock face at Castle Rock. The matter is still being investigated by the Coroner, however the family wish to highlight a safety risk to those in the climbing community.   The family ask climbers to consider very carefully their reliance on equipment left permanently fixed to rock faces, and the condition of this equipment. This equipment will naturally be affected by UV rays and other elements of nature effecting its condition and reliability.   There will be a private memorial service held on Sunday to celebrate Kimi’s life. A Rahui has been placed on Castle Rock until it can be lifted by local iwi next week.   The family have travelled from California. They would like to thank the two rock climbers who attempted a rescue, the Kuaotunu Land Search and Rescue Team who assisted on the day, members of the New Zealand Police, the US Consulate, and friends in New Zealand.   The local community is organizing a fund in Kimi’s memory, the proceeds of which will be used for the purpose of maintaining existing hardware and fixed lines in rock-climbing areas around New Zealand. We are working to make climbing accessible and safer to everyone, and to prevent avoidable deaths like this in the future. We are collecting funds through givealittle: https://givealittle.co.nz/cause/kimis-legacy-fund#   ENDS   Issued by Police Media Centre.