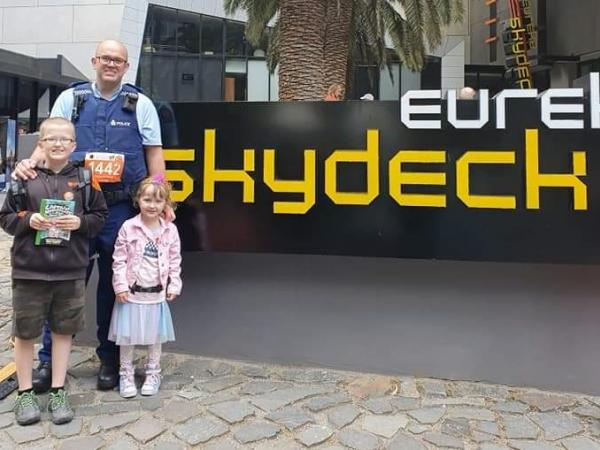 Home > News > Stepping up for a good cause

Taihape Constable Justin Moore is tackling the Stadium Stomp at Eden Park in Auckland to raise money for the Leukaemia and Blood Cancer Foundation.

The annual stair climbing event, held this year on 4 April, is one of many held for charity and it's the third time Justin has competed.

“I previously completed the Sky Tower Challenge when I was part of the Taihape Volunteer Fire Brigade and last year I competed in the Eureka Tower Challenge in Melbourne where I was really grateful to those who helped me be the third highest individual fundraiser for the event,” says Justin.

“The best part of the challenge for me is raising money for the charities so it can go towards helping people in need. It’s also an awesome feeling finishing the challenge, and you get to meet some great people along the way.”
Justin will be wearing his uniform including his SRBA vest for the stair climb and while up in Auckland will visit the oncology ward at Starship Hospital to meet some of the kids undergoing treatment.

“For me the biggest highlight will be spending time with the children at Starship. It will also be an emotional experience to see what they are going through,” Justin says.

“I have had massive support from my colleagues and the fantastic Taihape community. AFC motorcycles donated a chainsaw to the raffle and Leanne Bird at LB Fitness Gym is cracking the whip training me.

“I can’t sing their praises enough, it is really a team effort.”

Donations of any amount are greatly appreciated and you can sponsor Justin by checking out the Stadium Stomp Auckland fundriaser page.