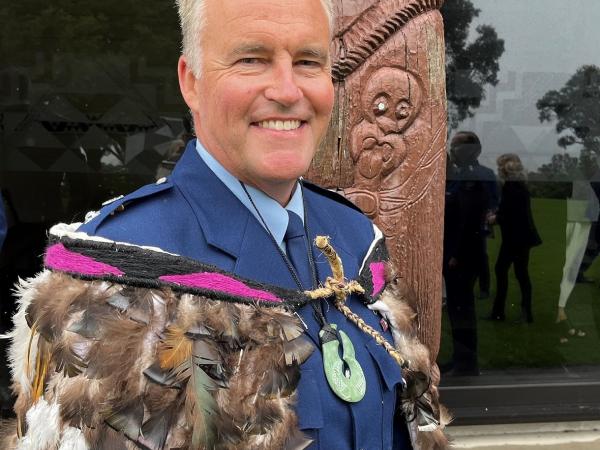 A new Police District Commander, Superintendent Tim Anderson, Te Atihaunui-a-Paparangi was formally welcomed with a pōwhiri to the Bay of Plenty District this morning at the Hungahungatoroa Marae in Tauranga by local iwi and guests.

Kaumātua and Hungahungatora Marae representative, Tony Fisher says, “It’s a privilege to have a police officer of great experience and mana leading the district. Ngāi Te Rangi, Ngāti Pūkenga and Ngāti Ranginui recognise the importance of our work together going forward so we can support Tim in his position."

Today's pōwhiri was an opportunity to officially pass the baton onto Tim who is no stranger to the Bay of Plenty District.

Describing the pōwhiri as being an emotional experience Tim says he was extremely humbled by the occasion and is looking forward to being back in the area he’s worked in several times over his 28 years in Police.

“Stepping into this role it is my desire to say and do things that make our collective community proud.  I have a strong commitment to strengthening partnerships and increasing the public’s trust in Police.

“In every interaction I have, whether it’s dealing with offenders, victims, partners or the public, I want them to know that when they see me and they talk to me, that I am here for them and I am also here for my incredible team throughout the district,” says Tim.

Tim holds a Bachelor of Laws with Honours from the School of Law, Auckland University, majoring in International criminal law and employment law.  He joined the Police in 1994 and has held a range of appointments across Auckland and Bay of Plenty, including supervising many investigations into a wide range of serious criminal offending.

As a trained Personal Protection Officer, Tim has been part of the operational security planning teams for major political events in New Zealand such as APEC and CHOGM.

As a Senior Sergeant, Tim managed the prosecution offices in Auckland. In 2008, he moved to Rotorua as a Detective Senior Sergeant where he gained significant experience in serious crime investigation and the covert side of investigating organised crime.

As a Detective Inspector, he was the District Crime Manager in the Bay of Plenty for five years and during this time he solved several cold case homicides.