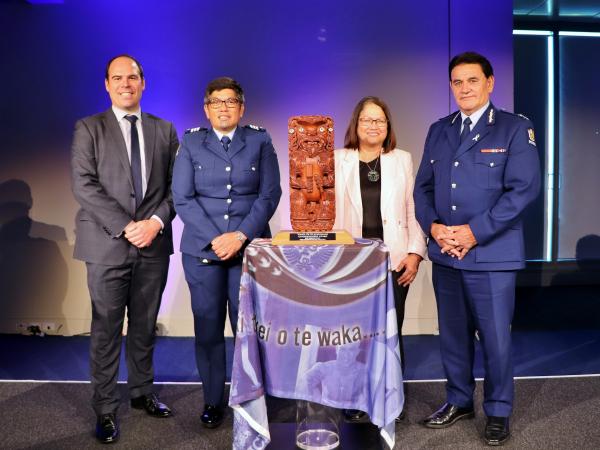 Te Pae Oranga, administered by Police’s Māori, Pacific and Ethnic Services group and iwi partners, was recognised for its success in using restorative community processes to keep people out of the courts for low-level offending, while holding them accountable for their actions and addressing the underlying causes of their behaviour.

Eight harm-reduction projects from Police districts around New Zealand and from national workgroups were selected as finalists (summarised below) and competed for the Supreme and four other awards.

Finalists had to show they had proactively identified and analysed recurring crime or disorder problems in their communities and how they had developed, implemented and assessed effective responses to these problems.

Mark Evans, Deputy Chief Executive of Service Delivery, says all eight projects were award-worthy and that picking the winners was a difficult decision for the judging panel.

“I am immensely proud of New Zealand Police and its partners - all eight projects are making a difference across the country every day,” he says.

These are the 7th EBPOP awards held by New Zealand Police. A number of previous winners have subsequently presented their projects at the Herman Goldstein international awards in the United States.

“This year the standard of entries was exceptional - I am proud of the work that these entries have done in responding to problems in their communities,” says Commissioner of Police Mike Bush.  “Underlying each of these entries is Police’s national operating model Prevention First, which calls on police to take every opportunity to prevent harm.”

Excellence in the generation, application and development of evidence: Te Ara Oranga

For more than 20 years, Māori have been over-represented in the criminal justice system.

In 2013/14, three iwi panels were set up in Gisborne, South Auckland and Lower Hutt, introducing values of manaakitanga and whakawhanaungatanga into the justice system.

People were held to account for their offending, helped to address the harm caused and supported to access services that would help them away from offending.

In 2017/18, a further 11 panels were established, and the original Christchurch Community Justice Panel brought into the programme.

The latest evaluations have shown that iwi panels are effective for people of all genders, ethnicities and ages. Harm from reoffending has fallen a measurable 22.5 percent.

Offending by Māori and Pacific girls in Counties Manukau East has fallen 28 percent over four years and overall total reoffending for young women has fallen 33 percent.

In Levin, police and the local community worked together to improve two parks the community felt were dangerous, dark, full of graffiti and unsafe, reflecting the general state of the neighbourhood.

The NPT worked with the community to clean up the streets. Barbecues were held, a Junior Neighbourhood Watch was started at the local school and the community was asked what they wanted improved.

One park was cleaned up and new equipment installed. In the second park, events were held and, backed by local businesses, a toilet, water fountain, barbecue and pump track were installed.

The parks are now well-used and well-kept, with no vandalism or damage in the past six years. The wider area has regenerated.

Methamphetamine use, related crime and its associated social impact is severe in Northland, costing community, individuals and whānau significantly.

In response, in 2017 Te Ara Oranga was jointly launched by Northland DHB and Police to reduce demand for methamphetamine.

Specialist Police staff and DHB experts were assigned to reduce supply and demand and associated harm by targeting dealers and referring identified users and whānau into health care.

Northland DHB developed a model of care to expand their own services, as well as those of Iwi, Primary Health Organisations and Non-Government Organisations.

Methamphetamine admissions to Northland DHB's detox unit are significantly increased and a number of individuals have reported successfully turning their life around.

Between 2015 and 2017 there was a 64 percent rise in aggravated robberies of small businesses – primarily dairies, superettes, liquor stores and petrol stations - with an associated increase in violence towards owners and staff.

In response, in June 2017, the National Prevention Centre commenced an initiative which involved officers undertaking assessments of small businesses identified as being at most risk on the principles of Crime Prevention Through Environmental Design (CPTED). This included offering installation of a fog cannon.

As at 15 October 2019, more than 500 fog cannons had been installed nationwide, and there has been a noticeable reduction in aggravated robberies, loss of stock and harm to staff.

Whānau in Northland were constantly featuring in all the negative road user statistics.

Consultation with community, iwi and NGO partners identified early interventions and alternative resolutions as a positive response, enabling youth and their families to become licensed in a whānau ora model.

This initiative has directly contributed to improved job prospects, safer driver behaviour and improved trust and confidence. It has empowered rangatahi and their whānau to achieve their goals, leading to positive outcomes for the community.

Wellington Area CIB launched the #betterdecisions campaign in December 2017 to address the role of alcohol as a contributing factor in Adult Sexual Assault and questions of consent.

Messaging is visible city-wide where alcohol is served, particularly around Christmas and the start of the university year. The campaign is constantly reassessed to keep it relevant.

The Integrated Safety Response to Family Violence (ISR) was developed at Waikato and Christchurch pilot sites in July 2016. It takes a whole-of-family and whānau approach to consider the safety of adults and children experiencing violence, and work with perpetrators to prevent further harm.