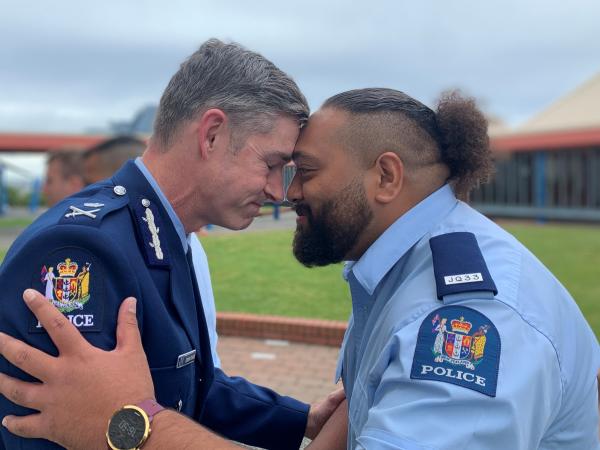 Fifty-eight new cops have completed their training for the frontline and will graduate on Thursday at the Royal New Zealand Police College.

In this Police wing, blue and gold go well together – and not just on the Police Coat of Arms.

Constable Ella Gunson, one of New Zealand’s Black Sticks hockey players, won gold at the 2018 Commonwealth Games, and is aiming to compete at the 2021 Olympic Games.

She says the police training has complemented her hockey training by building her resilience.

“During my police training it has been so important to remain calm and composed during stressful, heightened situations and this aligns with competitive sport.

“I have also found that completing my police training has given me more of a purpose outside hockey. I believe having this good balance between work and hockey will be essential in remaining fresh and motivated to put in the hard yards on the hockey field.”

Ella will be posted to the district she grew up in – Northland District – and she says she’s doing it for the people of Northland.

“I am really passionate about my local community. I want to try to help and support this community that has supported me for so many years.”

Rangi says she likes that Police consider themselves a big whānau.

“Whānau to me means not only support, but protection. I want to contribute to the Police goals to help our communities and whānau to be safe and feel safe, and to help develop the trust in Police that I never had as a kid.”

Rangi is posted to Bay of Plenty District.

Constable Dominic Malo, who will receive the Leadership Award at the graduation ceremony, has been described by his training sergeant as having “a heart of gold”.

“He wraps everyone up individually with genuine awhi. He communicates well, is a source of wisdom and influences others positively to strive to develop, to be their best,” says Sergeant Nat Cooper.

Dominic’s background is in helping young people, spending over a decade as a Youth Development Worker and working closely with Police.

“In my time working with Youth Aid constables I have seen that the Police environment demands excellence of our people because of the responsibility we have to our communities. I am excited to be part of this organisation where I can use my talents and passions to be of service to the Police and the people of New Zealand.”

Dominic is posted to Waitematā District.

It’s people like Constable Harmanjot Singh who are worth their weight in gold to Community Patrols of New Zealand (CPNZ). Originally from India and speaking Hindi and Punjabi, Harmanjot has volunteered for CPNZ in Queenstown and Tauranga and it was while working on jobs with Police that he thought, “Why can’t I be the one in that uniform? Why can’t I be a police officer and help and support the community?”

His questions are now answered, thanks in part to the support and encouragement he received from the officers at Queenstown Police Station during his Police application process.

Harmanjot is posted to Southern District.

There’s no medal for taking out the top award at the graduation, but first in wing Constable Alice Ander will have the honour of wearing the Police College korowai.

Alice will be working in Waitematā District, along with her father Sergeant Greg Ander who has nearly three decades of policing experience and no doubt some nuggets of wisdom to share with his daughter.

Alice says she has a huge passion for people and this is primarily why she wanted to join Police.

“I think the New Zealand Police is the perfect place for me to combine this passion and my personal values of kindness and helpfulness, and fulfil my desire to make a difference in my community.”

Commissioner Andrew Coster and Police Minister Hon Poto Williams will be present at the graduation ceremony on Thursday 10 December.

The new constables will have a one-week break before starting duties in their districts.

The wing is being dispersed as follows:

Media are welcome to attend the Graduation Parade which takes place at the Royal New Zealand Police College in Porirua.

The ceremony starts at 2.00pm on Thursday.

Any media wishing to attend the graduation should contact the Police Media Centre by 9am Thursday at media@police.govt.nz