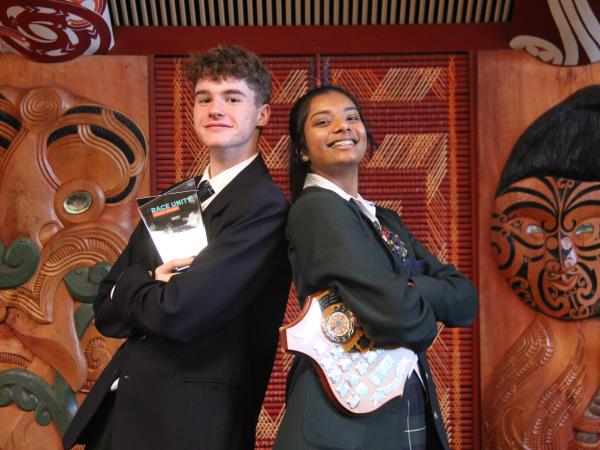 For the first time in 22 years, two speakers have been named joint national champions in the annual Race Unity Speech Awards.

“There comes a time like this when you can’t separate two winners, and of course two very powerful speeches that both deserve recognition.”

Joe Howells of Kerikeri High School and Sheryl Chand of Solway College in Masterton are the unprecedented joint champions of the Race Unity Speech Awards, which have been held every year since 2001.

Sheryl Chand’s speech was full of powerful and practical suggestions for dismantling racism, including abolishing academic streaming in schools.

“Research last year found that the practice of academic streaming in schools was discriminating and racist. Streaming often increases racial segregation within schools and it damages students’ acceptance of racial differences and general positive interactions between racial groups.

“We cannot just stop here. We must align our laws, policies and institutions with the underlying oneness and interdependence of all human life.

Joe Howells’ speech called for all New Zealanders to work together to eradicate racism, like the fingers of one hand.

“When fingers are broken, too busy oppressing the other, how can we weave our united future? How can we live in harmony or expect to grab a hold of greatness? We can’t.

“To be able to move forward in our society we need to respect all cultures, embrace diversity and learn from one another. All aspects of our hand working in unison with respect and aroha. Aotearoa is known for being a nation of pioneers… Why don’t we become the first to eradicate racism?”

Joe and Sheryl spoke alongside five other high school students in the national final at Ngā Kete Wānanga Marae at the Manukau Institute of Technology’s Ōtara campus this morning.

Minister for Diversity, Inclusion and Ethnic Communities and Minister for Youth Hon Priyanca Radhakrishnan was there to listen and learn from the talented young speakers.

“I come here to learn” says the Minister, “I learn so much from the words of our rangatahi.”

Minister Radhakrishnan has supported the Race Unity Speech Awards every year since 2018, when she served as a judge at the National Final. The Minister sees the Awards as a great example of the kind of diversity and inclusion that we need to create across all sectors of society.

“We need to take tangible steps to make our spaces more inclusive so that people of different backgrounds feel safe to share their perspectives and experiences.

“That’s the beauty of these Awards – they show us the true value of diversity.”

“It is important that we hear the voices of our young people and their concerns as the future of this country. My role in Police is to foster in the name of strong Iwi and Community Partnerships, with a strong focus on prevention. I also have a responsibility for the Youth Portfolio, so I get a lot out of listening to these bright young people at the annual Awards."

“What use is a hand without a thumb, or a bird with only one wing? This is how racial prejudice and injustice can cripple a whole society.”

“If we truly understand the oneness of humanity, then it’s clear that everyone has to play their role in dismantling racism. It’s not a Māori problem, or an immigrant problem – this is everyone’s problem to solve together.”

·         The Race Unity Speech Awards are organised by the New Zealand Bahá’í Community, a religious community concerned with promoting the oneness of humanity at the local, national and international levels.