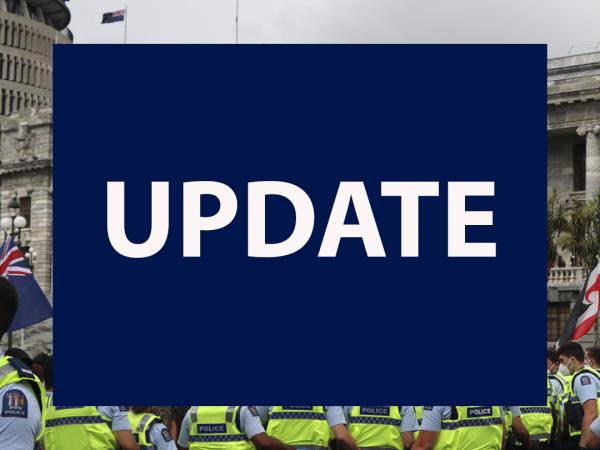 Police continue to be extremely appalled by the behaviour exhibited by protesters at Parliament.

Three officers were taken to hospital for a medical assessment this morning after being sprayed with a stinging substance that is still to be determined. All three are reported to be doing well.

Other officers were fortunate to escape injury after a person deliberately drove the wrong way down Molesworth Street and stopped just short of colliding with them.

The work undertaken by officers this morning was to further reduce the perimeters around the protest at Parliament.

This work is part of our ongoing efforts to reduce the impact of the protest on Wellingtonians, particularly those who live, work and study in the area around Parliament.

About 250 staff were involved in the operation early this morning to shift the existing concrete bollards to further reduce the area of protest activity.  Staff secured locations at Aitken, Molesworth and Hill streets to allow forklift vehicles to move the concrete blocks.  The bollard line on Aitken Street and Hill Street was moved in about 50 metres, and about 100 metres on Molesworth Street.

Following yesterday’s traffic management operation to install the barriers, Police were made aware of protesters' plans to again throw human waste at officers.  Shields were only deployed this morning after protesters had thrown objects at staff.

Officers will continue to be highly visible in and around the protest area today.

As we stated yesterday, it has become increasingly clear that genuine protesters are no longer in control of the behaviour in and around Parliament.

Police do not wish to interfere with lawful protest, but the behaviours we are seeing are unlawful and will result in enforcement action.