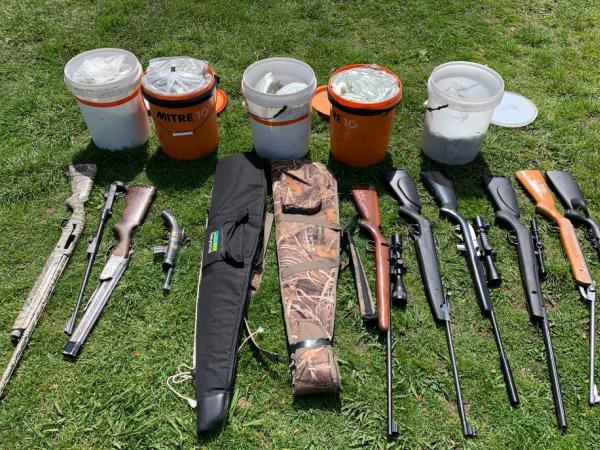 Waikato Police have arrested three people in relation to large quantities of cannabis found in Matamata and Piako.

Roughly nine kilograms of dried cannabis buried in underground storage pits were dug up by Police executing a search warrant at a rural Matamata property on Tuesday.

As well as the buried cannabis, hundreds of immature cannabis seedling was found as well as a cache of firearms and ammunition, methamphetamine, cannabis oil and LSD.

Two of the firearms located were loaded and two had had been cut down to become pistols.

The warrant was one of three executed at Matamata addresses by the Eastern Waikato CIB, assisted by the Armed Offenders Squad and Organised Crime.

A 33-year-old man has been charged with possession of methamphetamine for supply, possession of cannabis for supply, and unlawfully possessing a firearm. He will appear in the Hamilton District Court on October 26.

This is not the first time in recent weeks evidence of drug offending has been dug up by Eastern Waikato CIB.

Last week, officers dug up 10 litres of Gabba-Butyrolactone (GBL) when they executed a search warrant at a rural property just outside Morrinsville.

That warrant was part of an investigation by East Waikato CIB into multiple importations of GBL involving hundreds of litres of the substance often referred to as the “date rape drug”.  A 47 year old local man  is now before the Courts charged with importing and supplying the Class B Controlled Drug.

Waikato East Area Manager for Investigations, Detective Senior Sergeant Kristine Clarke says both seizures and arrests are a big win for Police and for the community.

"The seizure of GBL in particular is expected to have a significant impact on the sale and supply of this harmful drug in the Matamata and Piako community," she says.

We would encourage people with information about drug offending in our community to report it to Police. Police do what we do with the consent of the community and that includes members of the public providing information about crime. We will investigate reports of crime and act on it if there is sufficient available information for us to do so. You can get in touch with Police via 105 or report information anonymously through Crime Stoppers on 0800 555 111.