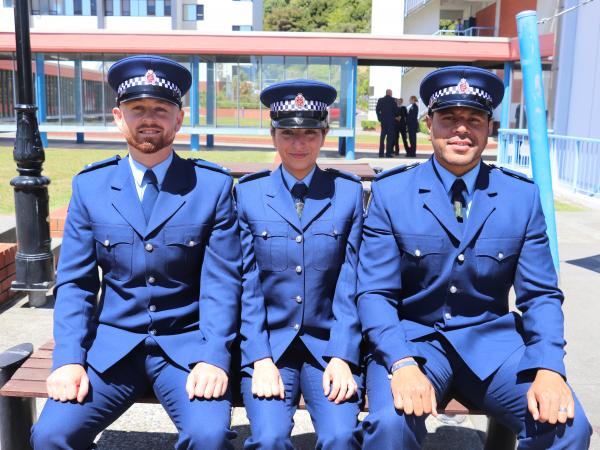 Fifty-nine new constables of Wing 348 were attested yesterday, at the Police College in Porirua, and will graduate tomorrow Thursday 25 November.

Dr Farouk is a member of the Police Muslim Communities Reference Group. This group guides Police in the implementation of the Royal Commission of Inquiry into the 15 March Terrorist Attacks.

In the aftermath of those attacks in Christchurch, Dr Farouk deployed immediately alongside Police. He played a pivotal role liaising with police, helping to plan the response to provide reassurance to affected families and the wider Muslim community. He has also been a voice for the Muslim community on firearms law reform and an advocate to address hate and discrimination.

When he spoke to the wing on their first day of training, Dr Farouk emphasised the importance of relationships between police and their communities.

“No matter what you do, relationships are important because that is what will make your work easier. My advice to you is get to know the people you’ll be dealing with.”

Due to COVID restrictions, limited numbers of family and friends have been invited to the graduation from alert level 2 areas of the country. The ceremony will also be livestreamed to those unable to attend.

The wing is being dispersed to districts as follows, starting their frontline duty on 6 December:


NOTE TO MEDIA: Unfortunately Media will not be able to attend the ceremony tomorrow due to COVID restrictions. Please contact media@police.govt.nz for any queries in relation to this graduation.

A Ten One Magazine story about the graduation, with photos, will be published on the Police website next week.