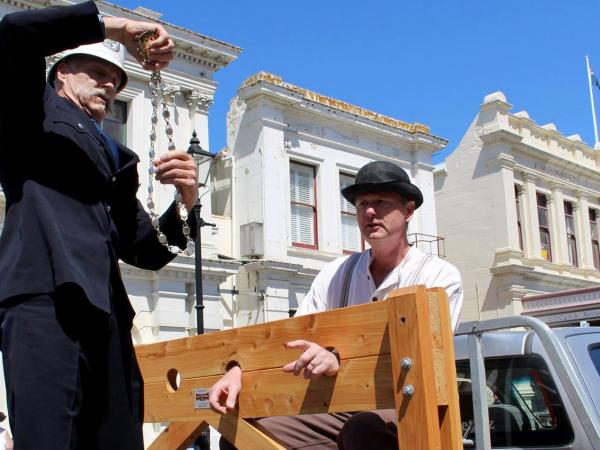 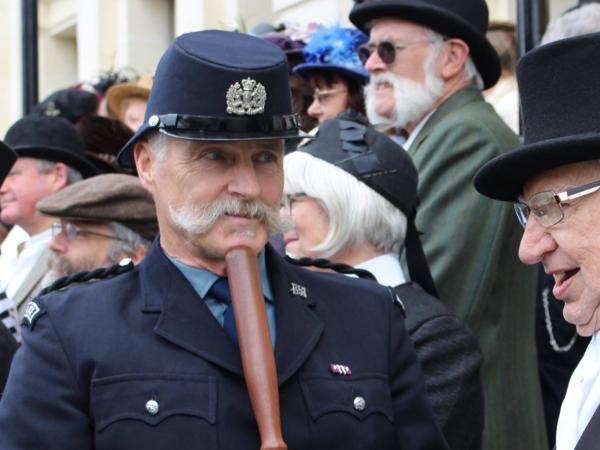 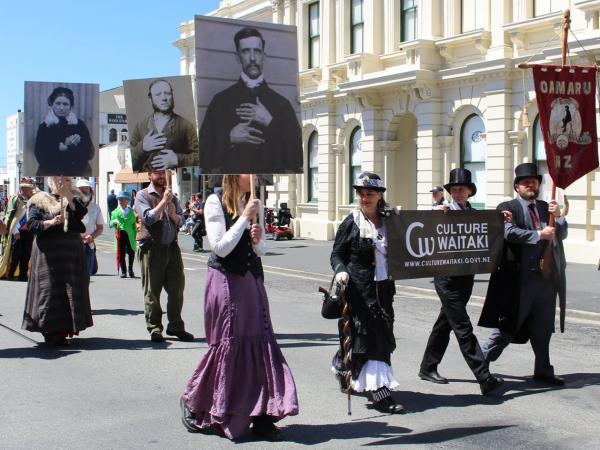 From arresting the Mayor for stealing the mayoral chains to coming second in a street boxing match, it was a pretty unusual weekend for Senior Constable Bruce Dow.

Oamaru hosted its annual Victorian Fete with Bruce – resplendent in old black uniform and variety of vintage headwear – in the thick of things in keeping with the theme of Crime and Punishment.

Bruce was on duty but was able to enter into the spirit in a number of ways - such as recovering the ‘stolen’ mayoral chain and clapping Waitaki Mayor Gary Kircher in the stocks, and staging some old-school fisticuffs with a ‘soldier’ who resorted to less-than-gentlemanly tactics.

He walked the beat, engaged with the crowds, broke up another illegal boxing match (staged) and posed for possibly hundreds of photographs.

At times he wore the military style shako cap, or white and black helmets.

Given the crime and punishment theme, Bruce also featured on the poster for the week, blowing a pre-Mobility whistle and brandishing a pre-Taser tactical option, the wooden baton.

“The hardest part for me is getting used to the attention the old uniform and helmet create,” he says. “People rave over the helmet and say how smart the old uniform looks.

“Lots of people had heard I was a real policeman and wanted it confirmed. I think that added to the authenticity of the uniform. Few realised it was my original 1973 uniform, with a leather belt that had shrunk a couple of notches in the wardrobe.”

Among those attending was former Constable Bob Wouldes, aged 91, who retired from Police in 1986. He is a regular at the Victorian Fete, travelling from his home in Kaiapoi.

Police Museum Director Rowan Carroll was also on hand to deliver the annual Forrester and Lemon lecture, on the subject of historic crime and punishment in Oamaru and North Otago, to a packed theatre.

She says while the audience enjoyed the presentation, she asked them to remember the victims and survivors of crime rather than focus on the offenders and increase their notoriety.

The museum also put on an exhibition at the Forrester Art Gallery - and old mugshots from the museum's 'Rogues Gallery' featured in the street parade.

Thanks to Oamaru Today for the photos.
Previous
PSU3 nails it!
Next
Stories from Wing 309