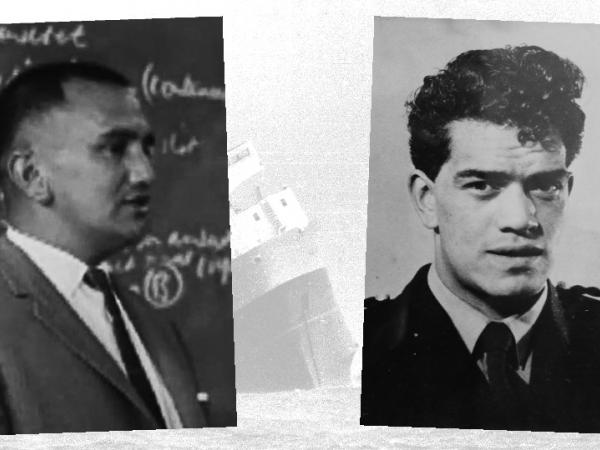 Home > News > Ten One Magazine > BEYOND PRAISE: Tata and Hoppy

WHEN he realised his lifejacket would keep him afloat, Detective Tata Parata thought he had a good chance of making it to shore.

Groups of survivors were congregating together as they drifted toward the Pencarrow coast.

“People were hanging on to their young kids,” he says. “One group I was in there was about eight or nine of us. A dad had his little boy by the hand. The little boy had a large-size lifejacket on and where you put your head he had right over his body.”

Rubber life rafts designed to hold 25 people blew past them, empty – whipped from people’s hands by the gale as they were untied from the Wahine. They were the first things to reach the shore.

From the water Tata could see boats trying to get people aboard – but they lacked rescue gear and were being tossed by monstrous swells which had them one moment five or six metres above their targets, then below them in a trough.

“You were flotsam and jetsam in the big ocean,” he says. “You had no choice but to go where you were taken.”

Tata was in the water for about 40 minutes. As his group neared the shore the churning sea separated them. “I don’t know what happened to those unfortunate people,” he says.

It was with huge relief that he felt his feet touch sand. Strong hands grabbed him and hauled him on to the beach. Attached to the hands was his friend and workmate, Constable Hapeta Hodges – known to all as Hoppy.

“He said ‘What the hell are you doing here?’ He grabbed me and put me down on the beach. I turned around and he was back in the sea and had two people in lifejackets, dragging them both to shore. To this day I don’t know what happened to them.

“It was a very odd sort of situation – you go over the side, you get landed on the shore and you get picked up by a work buddy.”

HOPPY HODGES was known for his fitness. He was a keen skindiver and dived often with John Bowman, though he was not a member of the Police dive team.

He had been dealing with storm damage in Stokes Valley when he was called to Lower Hutt Police Station. From there he was in one of the first cars of rescuers to reach Burdan’s Gate.

Soon after arriving he saw lifeboats coming in, with passengers jumping out in panic as they neared the shore. His first rescue was of a woman from one of the boats, holding a baby in the surf.

“She was bawling her eyes out. I went in and took the baby off her and went up to where the police cars were, where I gave the infant back to her. I took my tunic off and gave it to her. I was pleased to get it back because my pay was in the pocket.

“Those guys jumping in who couldn’t swim wouldn’t have a show because there were some big waves coming in.”

Later he had to retrieve one terrified young man from a bush up the hillside, where he had scrambled after getting ashore. “We had to make sure that once he got down he didn’t jump back into the water again,” he says.

Hoppy wrote an account of his actions which was included in Chief Inspector George Twentyman’s report on the operation. He describes going from beach to beach, dragging people from the waves.

Some were dead, and some he suspected were too weak to survive. He estimates the last person he helped was around 5km down the coast road.

He was interested to know if two women he had pulled from the surf in very weakened condition had survived. They had not – he found their bodies as he made his way back toward Burdan’s Gate.

“I was so fatigued towards the end of the rescue operation that I could hardly walk to the next raft – let alone run – and in this state of fatigue I was not clearly conscious of how many persons I was pulling out,” he wrote.

“I was buggered,” he says with less formality, remembering events 50 years later. “It was a hell of a day.”

TATA was walking up the coast road, soaked and missing one shoe but glad to be alive. He was exhausted but had just one injury.

“When I came ashore I kind of punched myself in the nose and broke it,” he says. “But no other cuts and bruises. Exhausted. Probably over-excited, glad to put my feet on the ground. Glad to have landed on a beach.”

He met a number of colleagues – including Constable Tom Penrose. “I said ‘What are you doing here?’," says Tom. "He said ‘I was on the bloody boat’. It was very unusual to hear him swear.”

Some thought Tata was a rescuer. “One of the young fellows came along and said ‘Parata, what are you doing with that lifejacket on? Put it back’,” says Tata. “They had no idea I was on the boat.”

He got to the assembly point and was taken to the RSA, where he was given dry clothes before being taken home. “I was probably one of the first survivors home, in a police car," he says.

“I had a bit of shock. They put me to bed and I had a bit of a turn. I went to the doctor and he told me about my broken nose but after that it was back to normal. I went back to work after about a week.”

Unbeknown to Tata, his colleague Dave McEwen had also jumped and washed up safe on the Eastbourne side. Eric Stretton made it ashore by lifeboat.

Tata kept his lifejacket. For some years it was on display at the Police Museum, where Tata would address groups of visiting youngsters. More recently it has been at the family home in Stokes Valley. “The lifejacket was a lifesaver,” he says.

Tata pressed for Hoppy to be given an award for his heroics but was told that everyone had acted in an extraordinary way that day, so to single out an individual would be unfair.

He accepts that, but doubts that anyone did quite as much as Hoppy.

Tata left Police in 1975. “I decided I had a lucky break and I that I would do something else,” he says. “I went to work for my iwi, became secretary of the New Zealand Māori Council for 35 years.

“I had an opportunity to do something else and thought it would be more positive. Not that Police wasn’t positive but there were a lot of gaps in Māori life that needed to be fixed.”

He counts seven members of his whānau who serve or have served in Police, including a son, daughter and grandson.

Hoppy went back to work the day after the tragedy. In his 33-year Police career he achieved legendary status as a community officer in Naenae, in the Hutt Valley. He also served in Wellington’s Armed Offenders Squad. In 1985 he received a Queens Service Medal for his police work and retired in 1989.