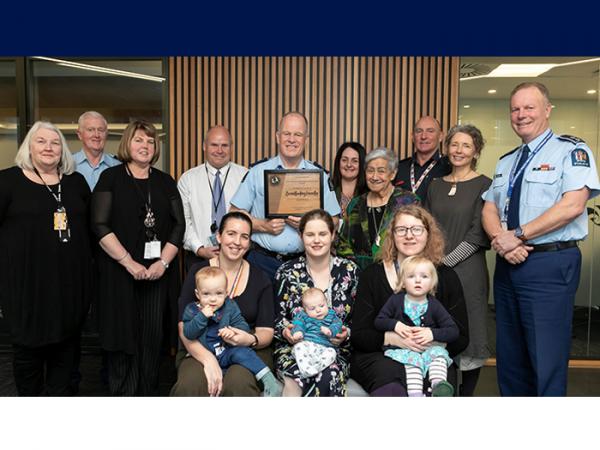 To cap off World Breastfeeding Week, Te Omeka, the Justice and Emergency Services Precinct in Christchurch, has received official certification as a breastfeeding-friendly workplace.

This means all emergency services agencies at Te Omeka, including Police, have policies in place, facilities available and open kōrero to support breastfeeding in the workplace.

This is the first time certification has been given to multiple agencies and it all started with a breastfeeding mum, a cold dinner and an empathetic supervisor.

“Christina Daglish, one of our dispatchers, had recently returned to work after having her baby girl,” explains South Comms Inspector John Robinson.

“She was working late shifts but only ever had cold meals. I talked to her about it and she explained there wasn’t enough time in her 30-minute meal break to both express milk and heat up a meal and eat it.

“She also felt guilty taking extra breaks knowing her team would have to cover for her," John says. “She wasn’t complaining, but I thought, that’s not right. Something has to change.”

John contacted the Canterbury Breastfeeding Advocacy Service to see how he could do better by Christina. This started a project to bring all the agencies at Te Omeka together to support breastfeeding mums as they return to work and continue to feed their pēpi.

In New Zealand, breastfeeding is recommended for a minimum of one year, while the World Health Organisation recommends breastfeeding for two years and beyond.

“They are giving up their bodily autonomy, doing many, many hours of unpaid work and doing it all over triple shifts," she says.

“There are many benefits of breastfeeding for pēpi and mums, but it’s also about whānau wellbeing and community wellbeing – that makes it a shared responsibility.”

Christina, John’s inspiration for pursuing certification, was also there with her little girl, now 19 months old.

At the certification event, Christina (centre, with Poppy) and two other breastfeeding mums, Rachel from St John (left, with Daniel) and Erin from Police South Comms (right, with Liam), shared their stories about returning to work and breastfeeding in the workplace.

“Returning to work after having a baby is really hard,” Christina says. “I had so much guilt and so many worries, like ‘who would care for my baby when I go back to work?’ ‘Am I being present enough when I’m with her?’ ‘Am I performing my best at work?’

“It became a standing joke in my workgroup that I was going to down to Synlait on my breaks. I don’t mind the banter, it’s good not to feel like you have to sneak around.”