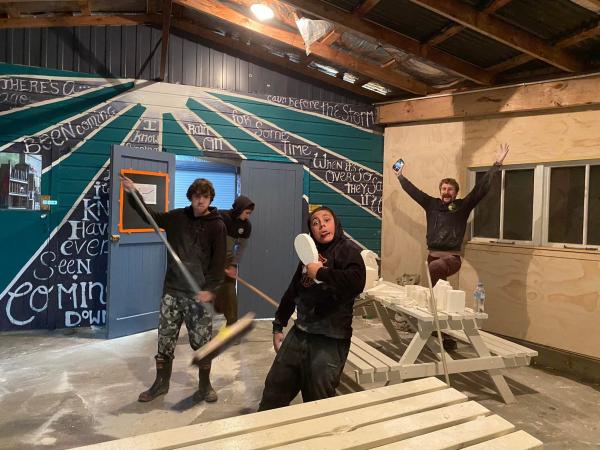 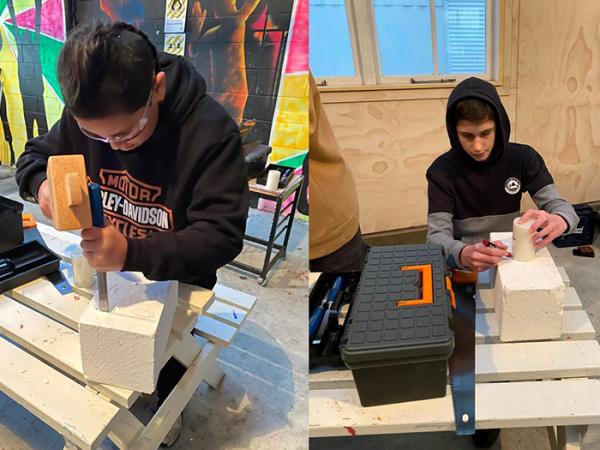 ​When Dannevirke Constable Tim White was approached to run a youth programme in Pahiatua, it was an opportunity to combine two of his passions, helping our youth and Ōamaru stone carving.

During his time working in Pahiatua, Tim got involved in local youth initiatives including CACTUS, and engaged with students at schools and through attending family harm events.

Tim and his wife took in two teenagers who were struggling with their family dynamics at home, and through these circumstances had ongoing liaison with Tararua Community Youth Services (TCYS).

Tim says that Tira Mathews, one of the TCYS Pahiatua Youth Workers, approached him and asked if he would be interested in running a mentoring programme for boys and young men who would benefit from having a positive male role model in their lives.

“For the past 15 years I have been doing Ōamaru stone carving and Tira saw some of my work so gave me her blessing to create a programme,” says Tim.

“After securing funding from the Children’s Flexi Fund (CFF), I worked with Tira and her team to get the programme up and running with six boys aged between 11 and 17 who had been nominated by Police and Tararua Youth Services.

“We also had some fantastic support from our local Mitre Ten who supplied us with tools. It all came together brilliantly.”

The programme ran for the first time recently over six weeks, with about three hours per week spent carving and hanging out. 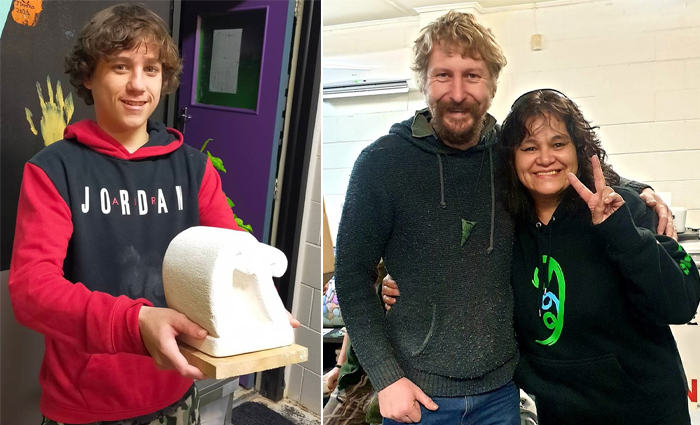 Tim and Tira, right, and one of the boys with their carving.

“The progamme was voluntary and we had the odd occasion where one of the boys couldn’t make it, but the main thing was that they knew it was a space for them to learn, enjoy some kai and music, and create something with their own hands,” says Tim.

“Over the weeks, we showed them how to use the tools and guided them on a project they wanted to pursue.

“The Youth Centre put on a dinner each night and we found the relaxed atmosphere just worked – some real magic happened. The boys opened up and looked out for each other - things just gelled.

“They enjoyed the physical aspect of carving – making something with their hands and trying to work out how to put a plan on paper and carve it. They all created cool carvings ranging from taniwha, to abstract shapes, and letters and numbers.”

Tim and Tira also had the support of Sergeants Brad Hall and Carey Williamson who came along to a few of the sessions, as well as Youth Worker Karen Thomas, and Tim Swales, a local SAR and Blue Light volunteer who had taken the boys on some Blue Light camps.

Tira says at the end of the programme, whānau of the youth were invited to come along to an exhibition to see the completed carvings.

“Tim did an amazing job and built positive relationships with our young people,” says Tira.

“The youth all learned a new skill which gave them a great sense of self-confidence. The feedback from them was fantastic, and I would like to acknowledge the commitment, dedication, and work that Tim put into this project.”

The biggest reward for Tim was seeing the boys grow in confidence and interacting with each other.

“Seeing their minds flourish and their perspectives broaden, as well as respect is a two-way street was awesome,” says Tim.

“One example of this was when I encouraged one of the boys who had proactively approached me about how another boy was disrespectful to his nan.

“The boy talked to the other boy about respecting women and to treat them well. A few days after this incident, the boy’s nan told me he apologised for the comment he made.

“Watching these boys take responsibility and leadership in mentoring the others around them was very cool.”

Tim says he is keen to run the programme a few times a year as he believes there is a gap in the market for this kind of initiative.

“It really impacts how the boys see Police, especially if it has been in a negative light because of what might have happened in the past,” he says.

“Their perceptions do a complete 360, they now wave to us down the street and say hi."

Previous
Guardians of our history
Next
'You will be remarkable'