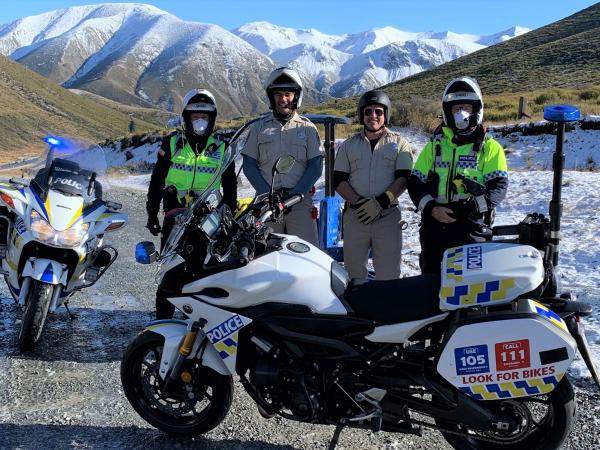 Home > News > Ten One Magazine > A charity event and a chinwag

​Policing motorcycle gang runs isn’t unusual for Sergeant Lachy Garrick and Senior Constable Mark Middleton – but this run was anything but typical.

On Saturday 21 May, Lachy and Mark accompanied 237 riders from Christchurch to Arthur’s Pass. The riders were taking part in the Tranz Alpine Scooter Safari, but instead of patches they were wearing fancy dress costumes and instead of Harley Davidsons they were riding 50cc scooters.

In a gruelling test of endurance, this large, colourful gang travelled 250km through freezing temperatures over the Southern Alps, raising over $300,000 for the Cancer Society.

Lachy and Mark joined them for part of the ride to provide encouragement, strengthen the relationship between motorcycle riders and Police, and help ensure the safety of riders, the large support crew and other road users.

Lachy says it is a great event for a really good cause.

“It’s a tough ride and in the middle of winter. This is intentional as a battle with cancer often creates similar challenges. However the atmosphere and enthusiasm of participants is awesome. There are some very creative costumes and vehicles and a lot of work goes into it,” he says.

“I’m yet to meet someone who hasn’t been touched by cancer, so to raise that much money for the Cancer Society – it’s just a great thing to do.”

At this year’s event, a moment at the top of Porter’s Pass had special significance for Lachy.

“I stopped at the top of Porters Pass just as two CHiPs characters were being photographed and we joined in the photo,” he says.

“The person who took the photo recognised me and it turns out she is the wife of one of my old Police colleagues, Brent Fredrickson.”

Lachy and Brent worked as constables on section at Henderson Police Station (now Waitakere), West Auckland, back in 1989.

Sadly, Justin, who became a dog handler in Canterbury, and Craig both died of cancer – Justin in his mid-30s and Craig in his early 50s.

“Both Ces and Craig were renowned for getting into mischief – there are loads of stories that are generally shared over a beer but rarely put into print,” Lachy teases.

“I’m so pleased we got the photo – it was a lovely coincidence and it was wonderful to make the connection with old friends.”