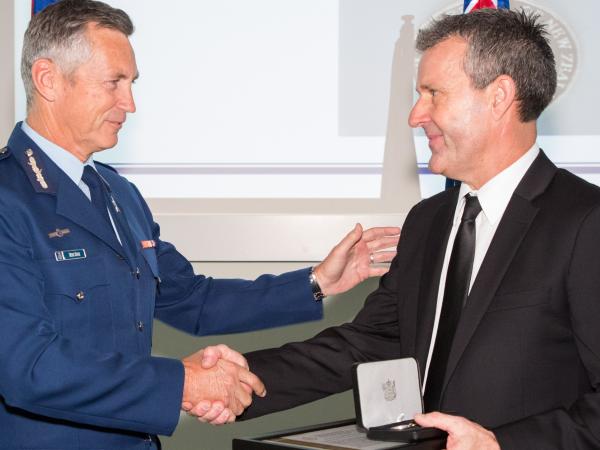 The bodies of Pakeeza Yusuf and her daughter Juwairiyah 'Jojo' Kalim lay buried beneath a motorway bridge on Auckland's North Shore for more than seven years.

They would probably still be there but for the dedication and meticulous teamwork of police involved in Operation Annette, which unravelled the mystery of their disappearance and unmasked their killer.

Being part of Operation Annette was a career highlight for Counties Manukau Detective Sergeant Stephen Nightingale, who was the O/C for the 20 months prior to its resolution in October 2014.

It was one of a large number of homicide and serious crime investigations he has worked on or led during his 24 years in CIB, and today his outstanding contribution was recognised with the NZ Police Meritorious Service Medal.

Commissioner Mike Bush presented Stephen with the medal in front of his former and serving colleagues, family and friends at Counties Manukau District Headquarters this afternoon.

The MSM was established by Royal Warrant and is the highest award the Commissioner can bestow. It is available to constabulary and non-constabulary staff who have provided outstanding service worthy of special recognition. Stephen is just the 13th recipient since it was first awarded in 2014.

Speaking ahead of the ceremony, Stephen emphasised the contribution of his colleagues.

"I am proud and humbled to receive this award, and I would like to thank the Counties Manukau CIB management for their support over the years. Most importantly, I want to thank my colleagues because without them, I would not be receiving this award.

"They are the ones, really, because you can’t do things on your own, can you? Without them, the good stuff doesn't happen."

He also acknowledged the strong support he had received from his family.

Commissioner Mike Bush said Stephen had been an "outstanding and consistently high performer and leader in the CIB over many years".

"He has worked on a large number of homicide and other serious crime investigations and has demonstrated passion, commitment and unwavering energy in his day-to-day work. I'm sure all staff join me in congratulating Steve on this achievement."

Stephen's career with Police began in 1988, and he has been based in Counties Manukau ever since. He joined the CIB in August 1993 and was promoted to Detective Sergeant in April 2005.

He said the investigation into the disappearance of Pakeeza and Jojo stood out as a highlight because of the complexity of the inquiry and the teamwork involved.

Pakeeza and Jojo are thought to have been murdered in late 2006 or early 2007, but they were not reported missing to Police until January 2013. After a lengthy investigation, their remains were located under North Shore's Takapuna Landing Bridge on 18 October 2014.

Pakeeza's ex-partner was found guilty of the murders and sentenced to life in prison in June 2016.

"They had obviously been buried there for seven years and if we hadn't found them, they would never have been discovered.

"It had been seven years since they'd gone missing and we used every resource available to us in New Zealand Police to find out what had happened.

"I remember saying to one of the other officers that this is probably the biggest teamwork effort you will ever see in New Zealand Police. It was a major team effort."

Previous
Through hell and high water...
Next
Veteran prosecutor Bruce signs off