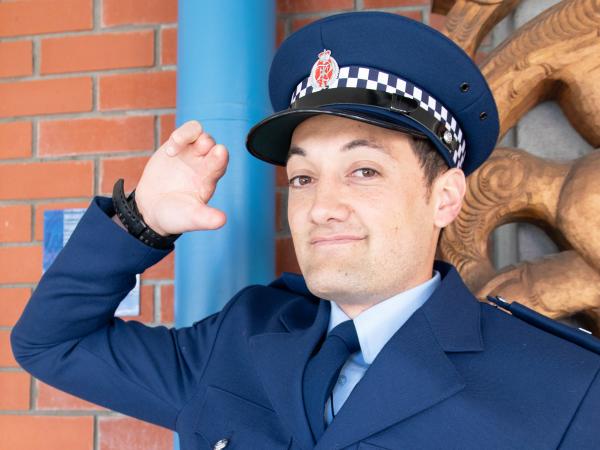 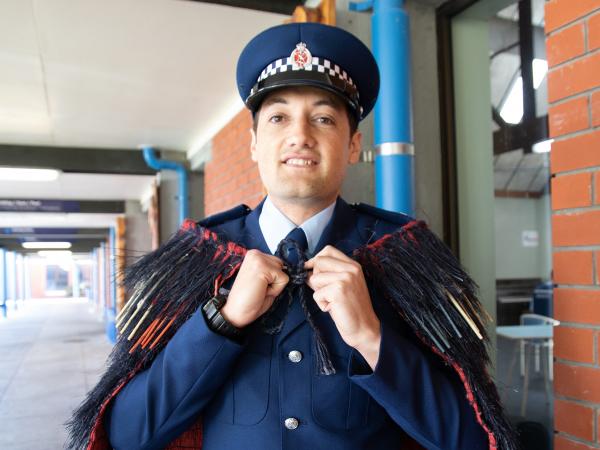 “I wanted to earn my way into college and earn my right to be a cop. I had to pass the same tests as everyone else. Yes, my hand doesn’t work the same as everyone else’s but I just find my way of doing things.”

Constable Ramon Diamond (Ngapuhi, Ngati Wai) graduated with Wing 330 at the Royal New Zealand Police College (RNZPC) in September. He is 29. When he was 17 fireworks went off in his hand – he lost four fingers as his hand was ‘shredded’.
Now on section in Whangārei, Ramon’s experience with the recruitment and training process at Police is that differences are accepted. His impairment was seen as a difference that he brought with him to Police, rather than a disability.

“I’d wanted to be a cop straight out from school but when I did my hand I had to put that on hold.”

After the accident he spent two years in and out of hospital. “I can’t tell you how many corrective surgeries I had. It was a long recovery but the surgeons were great and gave me a lot of mobility in my hand.
“It took me 10 years to adapt and come to terms with it – put it to bed. For me to be normal in my own mind. I’m at the point now that sometimes I forget that I’ve got an impairment.”
Ramon worked as a lifeguard and then ended up in Levin as a teacher aide. “There I was dealing with kids who were struggling with a lot of things in their lives and were dabbling in crime. You could see the patterns of family harm in their lives and other challenges.
“As a teacher aid I was a band-aid. I thought I could make more of a difference if I was in Police, and I’d always wanted to be a cop, so I decided to chase it.”
But would he be considered for police college with his impairment? Ramon emailed the RNZPC and, after some discussion, a pre-assessment opportunity was organised.
He travelled to the college and spent two hours handling batons, tasers, cuffs, OC sprays - every tool police officers use on the beat.
“An instructor from each specialty area helped me work out how I would handle the tool. They were great. I was cleared on the spot and given the green light to go ahead with my application.”
Ramon was accepted as a recruit. Once at college, he found everyone treated him as if he was just another recruit – which is exactly how he wanted it.

“People assumed that if I was at the College I must have met the grade and got through the application process just like everybody else – which I did.

“I applied myself to everything – some things challenged me with my hand, but a lot didn’t bother me.”
The time with instructors in the pre-assessment enabled Ramon to have an idea of how to handle the tools. “I already had a road map and only had to make slight adjustments.”
Firearms were a particular challenge. “The pointers they give are designed for people with two hands. I had two weeks to figure out my way. One day it just clicked.”
With his new technique he could fire straight at target, and he passed all the firearms tests.

“There’s a feeling at college that whatever you bring – your personal differences – they’re acceptable. Everyone is taken as what they are.”

Sergeant Tony Davidson, Ramon’s section sergeant at College, says he very quickly forgot Ramon even had an impairment.
“It never even crossed my mind. There was nothing fed back that he was having any difficulty. No issues were ever raised about his hand.
“Ramon just got on and proved his ability. In fact his peer group admired him – they were almost in awe in some regards.”
Now part of the PST team based in Whangārei, Ramon says he realises he has a lot more to learn and is soaking it all up. As for his colleagues’ response to his hand injury, he is very upbeat.
“I’ve had a really good response on section. People are very curious about my hand. They’re interested in how I do things. I prefer people to ask me about it, rather than not asking because they feel uncomfortable.
“But I don’t want special treatment. I just want to get on and do the job. It does me a service to not think about my hand – it works better if I just do something and if there’s a problem I find a way to do it.”
Previous
Difference, not disability
Next
Erebus part 4: Returning the victims