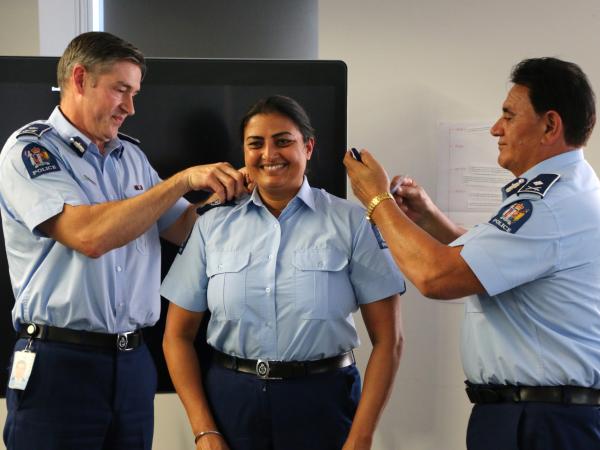 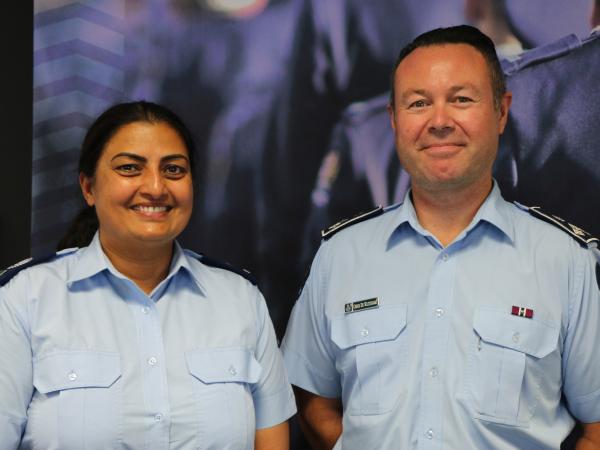 Home > News > Ten One Magazine > The dream that came true

To mark International Women’s Day, and its Choose to challenge’ theme, we speak to Senior Sergeant Mandeep Kaur, who has overcome plenty of challenges since being told she couldn’t be a police officer because she was a girl.

As a girl growing up in Punjab, Mandeep Kaur wondered about joining the police.

If you were a boy you could, her mother told her. The cultural barriers were too great, and Mandeep set off along different path.

“It’s such a very, very big day for me,” she said after receiving her senior sergeant epaulettes in a ceremony at Police National Headquarters (PNHQ) in Wellington.

“More so because it’s not an individual achievement - I see it as an achievement for the whole of my community. That makes it very special for me.”

Mandeep was married in 1986, before the age of 18, and had a daughter Parneet Kaur and son Amardeep Singh.

At the age of 24, with her children four and two years old, she became a single mother. She had already attained a Bachelor of Arts degree with Sociology and Political Science and left India in 1996 to study further in Australia. However, a custody battle was under way and she had to leave both children with her parents in India.

In 1999, Mandeep moved to New Zealand, where she was later reunited with Parneet and Amardeep. She set about a variety of jobs to support the family including taxi driving, working as a forecourt attendant and as an administrator at a training institute.

But in 2002 her childhood dream of joining the police resurfaced. The same gender barriers did not apply for applicants to New Zealand Police, but there were other hurdles to overcome.

“The biggest challenge was mentally preparing myself to wear a swimming costume in public to be able to learn to swim,” she says. But this and other challenges were overcome - in 2004, Mandeep joined New Zealand Police.

She has worked in metropolitan Auckland and in rural Pahiatua, often in family harm and community policing but also within Māori Pacific and Ethnic Services, and Intel. She has now taken another step, moving to PNHQ, with a promotion to senior sergeant and a role as Senior Engagement Advisor Ethnic in a new workgroup, Iwi and Communities.

Mandeep and Chris are long-standing colleagues from Counties Manukau, south Auckland, and old friends. They and Bruce O’Brien, also recently promoted to assistant commissioner, travelled through India together a few years ago.

After receiving his epaulettes, Chris turned to address Mandeep in front of an audience which included Amardeep and his wife as well as many Police colleagues.

“I know more about your story than you have told,” he said. “I know the background you’ve come from and I know the work, the energy and the dedication it has taken for you to get here today.

“So I’m absolutely proud of you. You’ve done an amazing job and I’m really looking forward to working with you.”

Mandeep has passed many milestones since 2004. In 2012, she accomplished her dream of post-graduate study by completing a Diploma in Business Administration from Waikato University.

In March 2019, she featured in Women Kind, a Penguin Random House book profiling 52 New Zealand women who have made a difference in the world and their local communities.

Mandeep has represented Police nationally and internationally in radio, television and written media - but most importantly within the communities she has served over the past 17 years.

She founded the famed Police bhangra group in Auckland to encourage cultural connectivity (and police fitness!), and is the proud grandmother of Oliver and Veera.

Mandeep is bringing that passion for connectivity to her new role, but now on a national scale.

“I was that young girl who had a dream and today I’m working at PNHQ, which is just a dream for many police officers,” she says.

“For this to be coming true for me is beyond words. Words cannot explain how happy I am.”

Previous
Who doesn't like a challenge?
Next
Chilly bin fishermen praise Police rescue