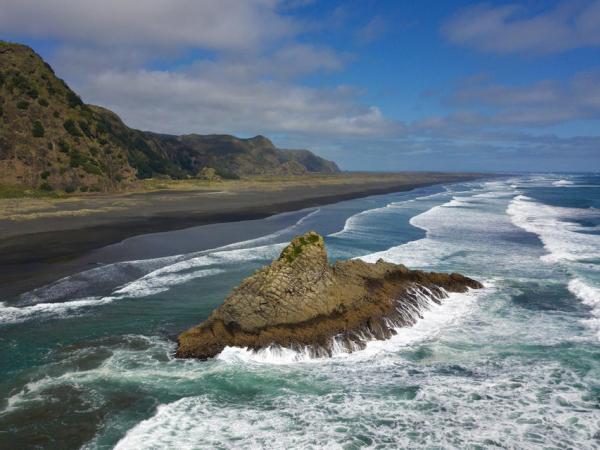 Finishing a busy weekend of Surf Life-saving duties on Auckland’s notoriously wild west coast was just the start of the action for an off-duty Waitemāta officer and his family.

Youth Aid Constable Shawn Wanden, his wife Shalema and daughter Jessica were packing up at Karekare Beach just south of Piha on Sunday 21 November when Jessica spotted three people caught in a rip in the middle of the beach.

They rescued them without incident, but when Shalema returned to the beach about an hour later to look for her sandals, she spotted another three people caught in the same rip.

She tried to signal to them but could see they were in real strife, so she called for assistance and started swimming out to them with three rescue tubes.

When she reached the trio, one of them was unconscious and floating head down. Shawn was out on a boat within no time, pulling the unconscious man from the water with the help of two other off-duty lifeguards.

By the time they reached the shore the man had stopped breathing but Jessica was ready and waiting with a defibrillator to start CPR. They successfully revived the man, then continued first aid until St John Ambulance and Westpac Rescue arrived.

“My wife was the real hero in this, swimming out with the three tubes, and my daughter did extremely well,” says Shawn.

“They were a family - two teenage boys and their father, who was the one we revived.”

While finishing up with the rescue effort, on duty Sergeant Dean Henderson, who by this time was also at the beach, was notified of a teenager lost and in need of rescue nearby. Comms was intermittent and it was unclear where he was as contact had been lost.

Knowing the area well, the Wandens had an idea where he was likely to be so Jessica volunteered to drive Dean and Constable Hannah Atkinson to the area, which was in dense marsh.

The Eagle helicopter located the teenager and after a very long and tiring bush bashing, he was located and walked out, then returned home to his father.

“The Wanden family played a major and important part in saving three lives on Sunday," says Dean. "This is an exceptional effort.

"They all went out of their way to help in every way possible, which made our job easier."

A very humble Shawn says he was extremely proud of his wife and daughter's efforts.

"I love the beach and we just want people to be able to enjoy it safely. That's why we do what we do."