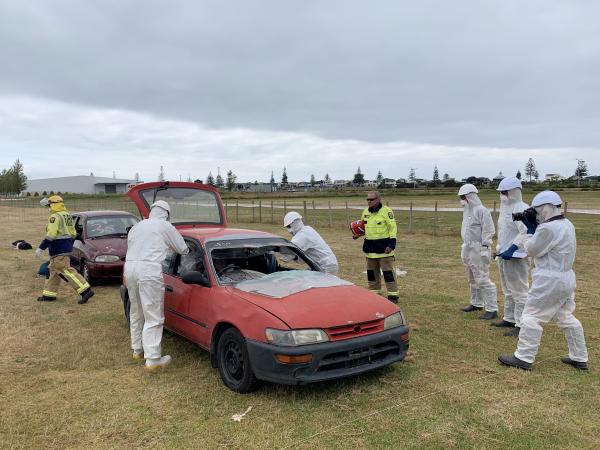 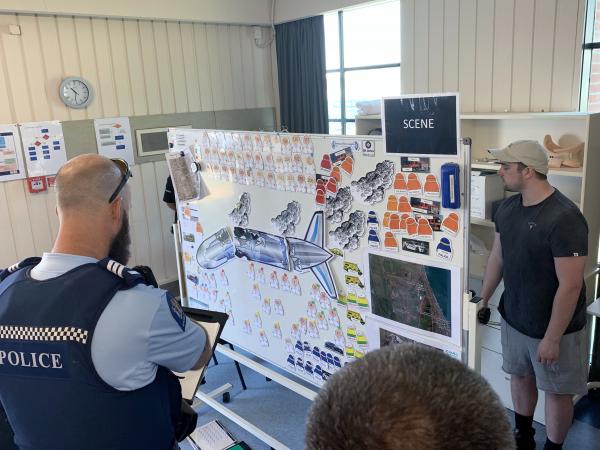 You might be forgiven for thinking a freezing works truck had shed its load.

The DHB ran its annual mass casualty tabletop exercise on Friday and Saturday. Police and other emergency crews dovetailed in on this scenario to make use of the set-up.

This year’s casualty event simulated a commercial plane with 72 people on board crashing on landing at Hawke’s Bay Airport. Local Police staff created a realistic mass fatality scene for the weekend, with a car crash scene added for a bit of extra training.

The scenario featured a mix of dead and critically injured passengers, represented by mannequins sourced from obliging Napier retailers – with the sheep offal providing added realism for the Disaster Victim Identification (DVI) component.

“Our scenario featured a mass casualty factor as well as partial and unidentifiable bodies needing to undergo the DVI process,” says Detective Mike Signal, incident controller for Police. “Members of Hawke’s Bay Search and Rescue squad were involved in the hospital exercise, managing the DVI side of the event.

“We were fortunate enough to use Napier Airport with our local squad members, and the exercise was run in conjunction with the Fire Service, Airport Rescue and Police, which was a great opportunity to improve training.”

Senior Sergeant Thomas McIntyre, National DVI Coordinator at Police National Headquarters, says the exercise was the scene phase of the DVI process, running in slow - not real - time with other agencies working together.

“It also doubled as a motor vehicle crash so benefit could be obtained from two scenarios,” says Thomas. “As you can imagine, it is nearly impossible to simulate an aircraft crash with a mass casualty component.

“We needed to be a bit creative with offal and some cars destined for the wreckers.”

It was a successful weekend, with lessons learned on wearing protective clothing, equipment and timing being crucial - and especially how hot weather and flies can affect the process.

“The decomposition of the offal in the heat was incredible,” says Thomas. “It was really interesting for the team and also helpful for them to know that time is of the essence in these incidents, and how important it is to try and remove the victims as carefully as possible, while observing cultural aspects and retaining evidence for the investigation.”

Previous
Have police station, will travel
Next
New HQ in HB