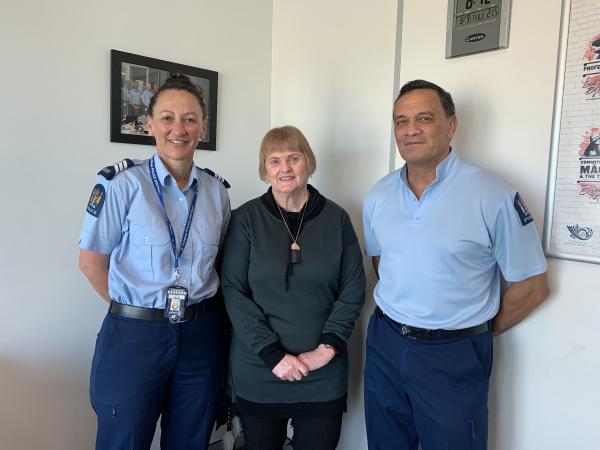 In the first of a Ten One series marking Te Wiki o te Reo Māori - Māori Language Week, Sergeant Steve Mariu shares his story of learning te reo and what it has meant in his life and policing career.  Click here or scroll down for the English translation.

It's not just a language

He spent his first few decades as a police officer trying to avoid marae because he feared being expected to speak te reo and he couldn’t.

But Sergeant Steve Mariu, now Pouwhakataki (Iwi Liaison Coordinator) in Tasman, says a course funded by his Police boss not only gave him the confidence to speak but a whole new perspective on policing.

“If you do the course you come away with a Māori heart.”

A police officer for 35 years, Steve spent most of his career in CIB in Counties Manukau. There he saw first-hand the familiar crime statistics relating to Māori – and acknowledges he shared the same bias towards them as many Pākehā colleagues.

“What an absolute gift,” Steve says now of the offer which saw them still paid and required only to forego their annual leave.

English was allowed on day one only. Then it was te reo from 9-3 (school hours) followed by several hours each night and even more at weekends doing homework at the kitchen table.

Although he’d grown up in a Māori home, his father and his grandfather were of the beaten-for-speaking-Māori-at-school generations.

When as a teenager Steve had expressed an interest in the language, his father had been totally dismissive. Even at the end of his life he told Steve not to take him to Tāpeka, their home marae at Waihi at the base of Lake Taupō, when he died but to keep him at home where they’d be comfortable.

Having no te reo also meant having little or no knowledge of tikanga or of Te Ao Māori, Steve says.

He was about half-way through the course when he knew something in him was changing. His wife heard him singing in the garden and asked him what was going on. The answer was simple – “My heart had softened and opened up.”

He also knew, on returning to work, that CIB was no longer the right fit. Instead he wanted to work in prevention, which he did in several roles including Youth Aid and, fondest in his memory, two years in neighbourhood policing in Papakura. “Probably the highlight of my career.”

As he gained more confidence in speaking, his newly acquired reo increasingly became part of his work.

He recounts an incident where he was supporting Pākehā frontline colleagues trying to arrest a Māori offender, who was surrounded by whānau. Some were his children, some his siblings.

All of them were amped, he says, and it seemed as if bulk arrests would be needed.

“I said to him in te reo ‘we are here to do a job. If you keep ramping up it will create a situation where others will be arrested too. You need to be calm. Think about it, mātua’.”

The offender responded by telling those supporting him to be calm, before allowing himself to be arrested.

“I visited him in the cells later and he thanked me,” Steve says.

It also helped bring about a turnaround in Papakura’s two most notorious streets, where attitudes to Police were so entrenched that kids would routinely spit at Police cars.

“I decided to get out of the car and talk to them. Within two months people would come out of their houses and talk to us. Then it was ‘Mātua, we will walk with you’.”

Steve is not only now fluent – he has done further courses – but also a passionate advocate for others learning te reo. And he’s not restricting that to Māori colleagues.

It would go a long way towards addressing bias, he says, “And I know many of my Pākehā colleagues would love to have the opportunity.

“I have loved going on this journey.”