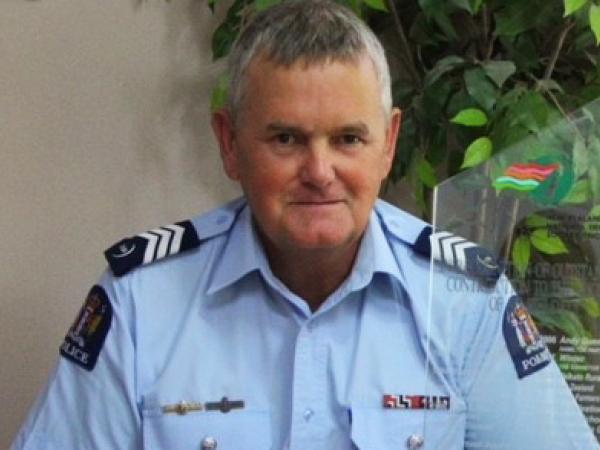 Police, family and friends will this week say farewell to retired Sergeant Gordon Grantham, an officer commended for work in areas as diverse as the undercover programme and community policing.

Gordon, who retired on 1 April after nearly 50 years in Police – including 27 as the face of policing in Cambridge - died on 28 December after a battle with cancer.

“He loved policing,” says his brother Inspector Ross Grantham, Central District Deployment Manager. “He was happy in his role and after being promoted to Sergeant in 1977 never sought promotion.

“He was absolutely committed to what he was doing.”

Gordon graduated from the 13th Cadet Wing at Trentham Police College in 1970 and began his career in Wellington.

In 1982 he was recognised with a Commissioner’s Merit Award for his involvement as an operator in the undercover programme. This included running courses for other operators and agents - and a leading role in one of Police’s biggest undercover operations.

In Operation Lollipop, Gordon’s agent was embedded in an organised crime network for a year, even becoming second-in-command to a notorious Wellington criminal before shutting him down.

In the late 1980s he worked with the Government of the day on security matters relating to reinstating Premier House as the Prime Minister’s official residence.

In 1990 he transferred to Cambridge as sergeant in charge of the station, a position he held until retirement.

“It was a huge change for him but one he really relished and a role he performed really well,” says Ross.

Among his achievements was establishing, with other members of the local community, Cambridge Life Skills and Victim Support.

In 1992 he was awarded the Queen’s Service Medal for his services to crime prevention and community. This was followed in 2001 by a Commissioner’s Bronze Merit award for his commitment to community-orientated policing.

Ross says messages of condolence have reflected the fact that Gordon chose to serve his community rather than seek the success he would have found at a national level.

Gordon is survived by his wife Di, three daughters and two grandchildren.

Gordon's funeral will be held at 1pm on Thursday 4 January at the Bledisloe Centre, Mystery Creek, Hamilton. Police will provide a guard of honour.
Previous
Royal Honours for three Police staff
Next
Extra mana for graduation day