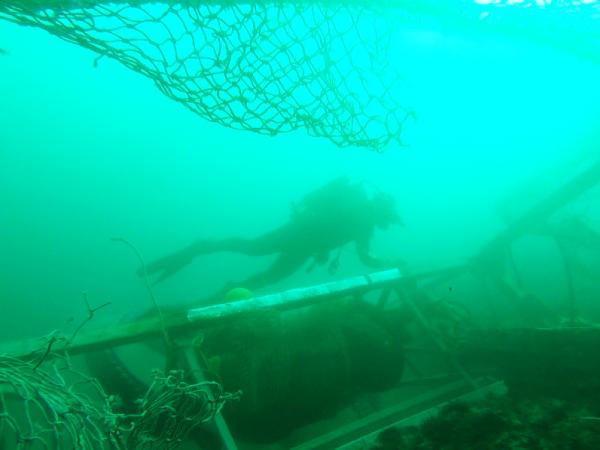 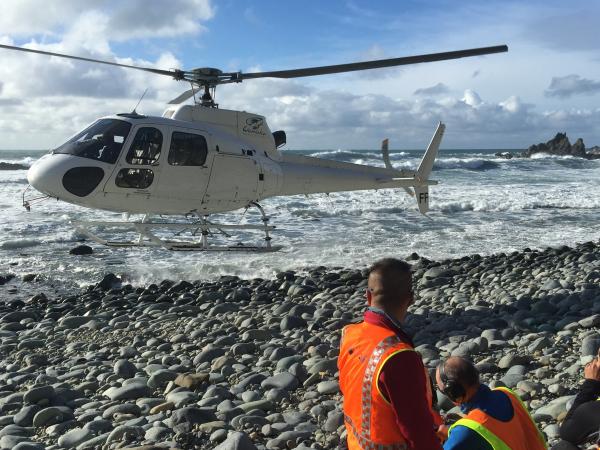 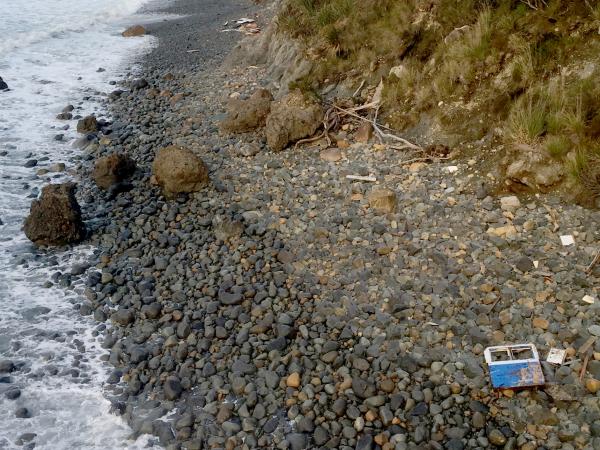 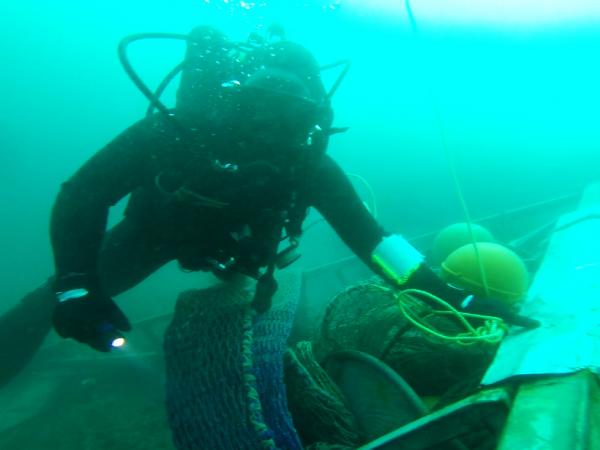 With inaccessible terrain, hostile weather and even sharks to contend with, the search for two missing West Coast fishermen was a tough task.

SAR teams scoured the remote and rugged coastline and police divers spent four days searching on and around the sunken fishing boat Wendy J. But despite their best efforts they were unable to bring one of the men home to his young family.

The Wendy J, from Greymouth, sank in Smoothwater Bay, south of Haast, during a storm on the night of Thursday 14 September.

The alarm was raised on Saturday 16 September when wreckage was seen along the remote and rocky shore south and west of Smoothwater Bay, though no vessel had yet been reported to Police as missing.

Senior Constable Paul Gurney, of sole-charge Haast Police Station, went up in a helicopter to investigate.

“There was wreckage spread five or 6km along the beaches and bays,” he says. “Nothing was very big or recognisable as being from a boat, apart from the life rings and life raft.”

As they returned to base they spotted Mr Thomas, who had been obscured in the bush line on their outward journey. One of the life rings they had seen was the one he got to shore with.

They were unable to move Mr Thomas along the beach to their landing spot and the beach nearer to him was too strewn with boulders for a landing so they picked him up with the helicopter hovering.

“The helicopter crewman thought he worked by himself and we were thinking ‘Great, he’s alive, no casualties’,” says Paul.

“We asked ‘Are you OK?’ and ‘How many others?’ and he held up two fingers - so we knew then there were two people outstanding. It was a deflating moment.”

Paul says Mr Thomas’ survival was remarkable. “It was very stormy with a nasty northerly on the Friday and he was huddled down in a flax bush in a singlet and shorts. The mosquitos and sandflies must have been terrible.”

Two helicopters searched until nightfall. The following day four SAR teams from Fox Glacier and Haast joined the search, supported by other members of the community. On the Monday Paul took part in another ‘low and slow’ helicopter search.

Four divers from the Police National Dive Squad (PNDS), plus support staff, arrived on the Monday evening and dived from the chartered fishing vessel Humma on the Tuesday and Wednesday.

PNDS supervisor Senior Sergeant Bruce Adams says with Mr Thomas’ help they located the wreck - lying broken up in around 25m of water, in rocky terrain pitted with crevices and caves.

They found Mr Cairney’s body among the wreckage, then continued to look for Mr Lynch.

On the Wednesday afternoon, amid worsening weather conditions, the search was suspended.

“The weather was getting worse all the time,” says Bruce. “We were working right inside a reef which was putting us and our vessel at risk. In the end it wasn’t safe for us to be there.”

The presence of fish carcases from the Wendy J attracted some unwanted attention. “It’s the most sharks I’ve ever seen on a dive,” says Bruce.

“They were pretty nosy but there was nothing too big. No man-eaters but it doesn’t do your nerves any good to be there in zero visibility knowing they’re around.”

The divers returned to Smoothwater Bay last week for two more days’ diving. Conditions were better, with about 10m visibility.

Bruce says they cleared a 360-degree circle around the wreck, pushing out in depths of up to 30m until there was no sign of debris.

The search was called off after six dives totalling nearly 300 minutes on the second day.

“We had a really good look,” says Bruce. “If we’d known for sure the gentleman was there we would have stayed and found him. But there was always a chance that he had drifted down the coast.”

Paul says aircraft and boats passing through the area are still keeping a look out in case the sea gives up Mr Lynch’s body.

“It’s frustrating to leave without finding someone – it’s what we’re there for,” says Bruce.

“But that’s nothing compared to the grief the family are going through. Ultimately that’s why we do it – to give them something back, or at least some answers.”