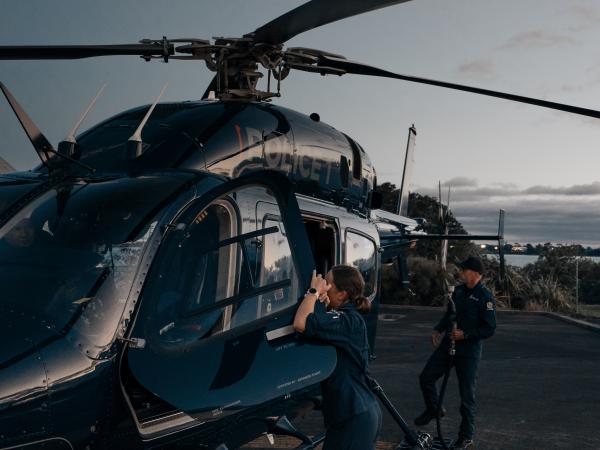 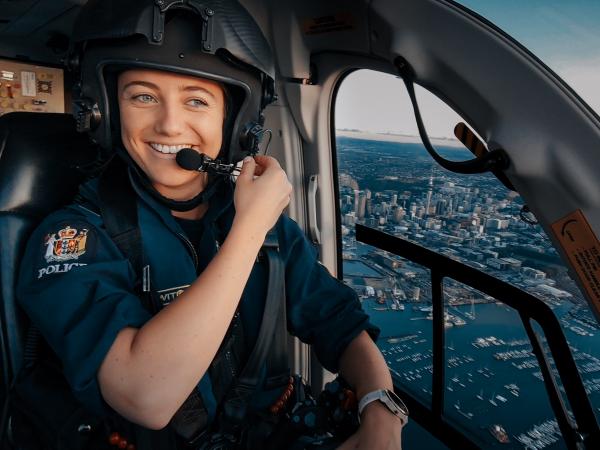 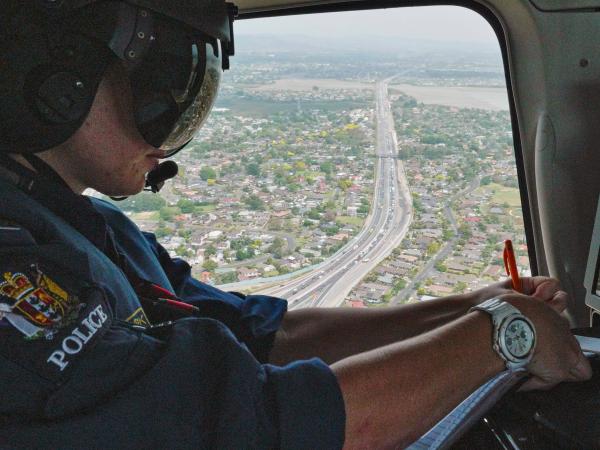 On the eve of International Women’s Day, two women from the crew of the Eagle police helicopter share their thoughts on their jobs.

After a few years policing on the streets, Constables Leah Temesvari and Alice Renouf found their careers literally taking off.

Leah and Alice now spend their shifts flying above Tāmaki Makaurau – and in the past month, Canterbury too – in the Eagle helicopter as members of Police’s Air Support Unit (ASU).

Like Eagle itself, Leah’s decision to take to the skies came out of the blue.

While studying Physical Education at Otago University, she began considering Police as a career – and a ride in Eagle in 2018 confirmed her plans.

“I was interested in Police Search and Rescue, but my career path took a different route when I took a ride in Eagle,” she says. “I had never considered it as a direction I would take until I went for a ride along at the end of 2018 and loved it.

“All the training specific to this job is provided – you just need to be willing and able to learn quickly. Some of the training has included rescue swimmer training, helicopter underwater escape training and night vision goggle certifications.”

Alice, who graduated from Recruit Wing 282 in 2013, has spent most of her police career in Tāmaki Makaurau. Her father was a police officer and in high school days she thought about an Air Force career – as a helicopter pilot – along with policing.

“The amount of time we spend in the air can differ hugely depending on what’s going on,” she says.

“Our shifts are all nine hours long and I’ve had shifts where we have flown up to six hours of that nine hours. It does balance out, because we’re only flying when there are jobs we are required at.

“You need to be able to multi-task trying to work the computer, use the binoculars, keep notes in your police notebook and work other gadgets.

"We go to so many fast-paced, exciting jobs though – multitasking quickly becomes second nature.”

Alice has experienced some successful jobs during the current Canterbury Eagle trial.

Eagle was called to assist when members of the public saw a car swerving on a rural remote, winding road, forcing oncoming vehicles to swerve out of the way.

With ground staff dispatched but still an hour away because of the remote location, a decision was made to land Eagle and talk to the driver. The crew found and spoke to the woman, who appeared intoxicated and was later arrested.

“Earlier in the day, the morning shift crew were alerted to a man who had suffered an apparent heart attack outside a Christchurch Park,” says Alice.

“Eagle was able to land in the park, set up the defibrillator that they carry on board at all times, and monitor the man's condition until Ambulance staff arrived.”

As in most police roles, some jobs offer light relief. “There was one job I had where the offenders were in a rural location and were using waste water pipes to hide from us,” says Leah.

“They kept popping up like meerkats in random places and then disappearing back into the pipes if they thought we’d seen them. It felt like I was watching a scene from an animal documentary.”

Leah heads to Christchurch soon to relieve the crews working on the five-week Canterbury trial, while Alice heads back to Auckland after her weeks on duty in the south.

Alice says the ASU looks first and foremost for good cops – excelling in everyday policing is the first step toward Eagle, as with any specialist squad.

Her advice to any potential recruits is that policing offers many exciting roles. “It’s up to them to see what’s out there and what interests them.

“I’ve always said that being in Police is like having 100 job opportunities in one. To obtain roles or succeed in any of the specialist squads you’re required to work hard and challenge yourself.”

Previous
Happy eighth birthday (sort of)
Next
The pipes (and drums) are calling... [plus video]