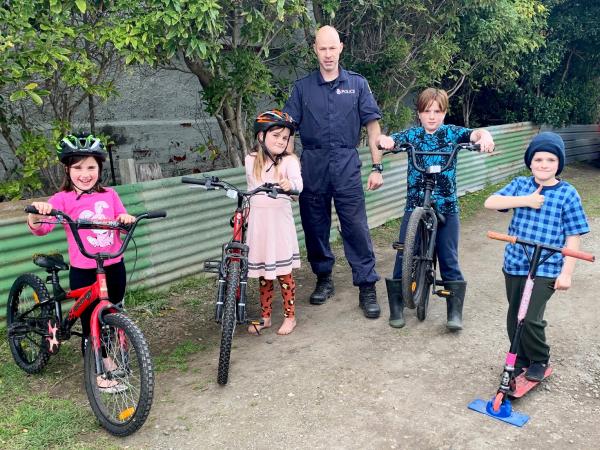 Home > News > Ten One Magazine > A gift that changes lives

What started as a Christmas toy appeal has grown into the gift of independence thanks to the efforts of dog handler Senior Constable Jason Page and other Whanganui staff.

For the past six months, Jason has been doing up bikes, otherwise destined for disposal, to give to youngsters and parents who would benefit from some support and positive Police engagement.

He came up with the idea after organising an appeal for staff to donate toys for the Safer Whānau team to gift to at-risk families at Christmas - a stressful and financially challenging time for many.

“My initial idea with the bikes was to add them to the Christmas present appeal,” says Jason.

“However, I realised there are many times throughout the year where we have opportunities to make a difference and how that help we provide, no matter how big or small, can be truly appreciated.

“After talking with our district commander about the idea and getting his support, I collected some bikes and during lockdown fixed them up.

“Our local bike shop, the Bike Shed, assisted by donating some secondhand bike parts and helped me fix some of the bikes.”

School Community Officer Senior Constable Rob Conder came on board, reaching out to his contacts to source helmets and lights to gift with the bikes.

Jason also put the call out to other dog section members, Youth Services, Community, and the Safer Whānau team to keep the cycles in mind when attending family harm or youth-related incidents.

“More than 10 bikes and a scooter have been gifted and it was fantastic to hear from one of our bike recipients, a 15-year-old high school student, how cool it was to have one and that he could go places now,” says Jason.

“Having reliable means to get to and from school can mean less truancy and give a real sense of independence.”

While Rob was making his school visits, a boy of about 15 walked past his car and abused him, so Rob sought a meeting with him at school the next day.

“I established that he came from a troubled background and had been brought up to believe Police were the enemy,” says Rob.

A connection was made and the youth apologised - and went one step further and gave him a hongi. “He wanted to make more of a connection, which was awesome.”

The next day, while Rob was delivering a bike to another student, the youth walked past and began a conversation with Rob - and said he wished he had a bike. So Rob and Jason found a suitable one, and gifted it to him.

“He was so chuffed and appreciative of Police,” says Rob. “I believe it really did leave a lasting impression on this youth, who otherwise would have continued to hate Police.”

Jason is grateful for the support of colleagues who have supported the initiative. “I want to thank staff who have donated bicycles, parts and accessories,” he says.

He is still keen to get more bikes or parts/accessories – and to hear from Central District colleagues about any child, youth or adult that would benefit from a bike.

Previous
YES, we can
Next
A mana-enhancing service