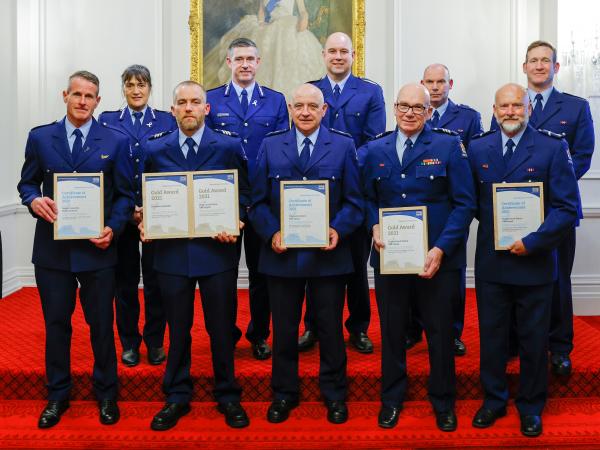 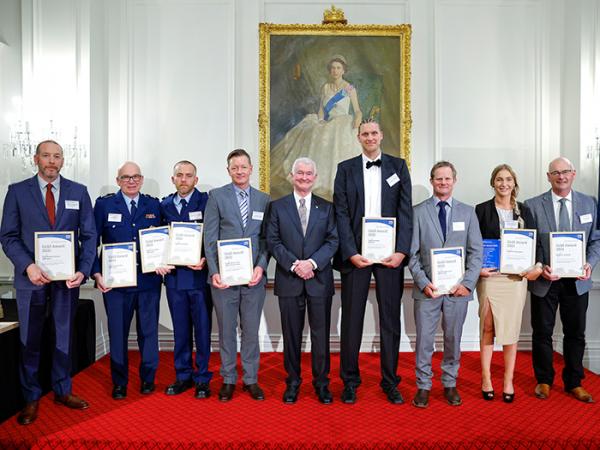 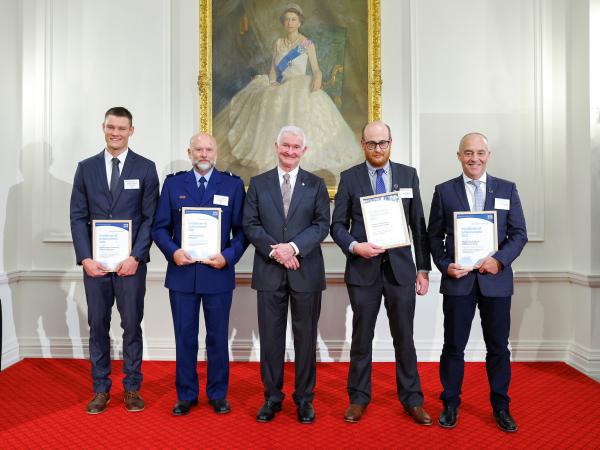 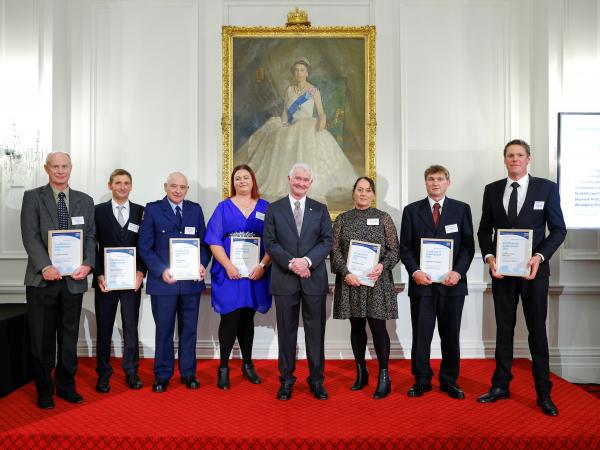 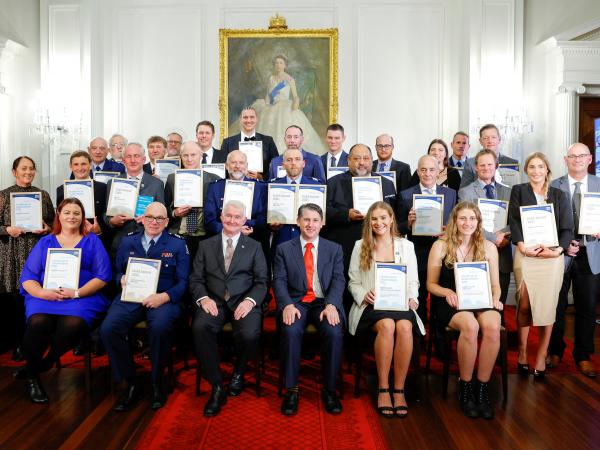 Whangārei Police SAR squad received a certificate of achievement for the rescue of a man from Mount Parihaka.

In addition, Senior Constable Mark Lendrum was recognised with a certificate of achievement for his part in the rescue of four adults from the sea near Kaiaua, in the Firth of Thames, in February 2021. (You can watch video of the rescue at the end of this story)

Inspector Craig Rendel, Manager Operations and Emergency Management at Police National Headquarters, says Police SAR experts work tirelessly with networks of volunteers, and specialist organisations to reunite the lost, missing or injured with their loved ones.

“It’s very rewarding work when we can achieve this, and receiving these awards is fitting recognition of the expertise, professionalism and partnerships required,” says Craig.

“All of the teams and individuals involved should be very proud of the recognition they have received.”

His Excellency Dr Richard Davies presented the awards at Government House in Wellington last night (17 May), on behalf of his wife, the Governor-General Dame Cindy Kiro.

The awards are presented annually in recognition of outstanding achievements within New Zealand’s search and rescue region, which covers 30 million square kilometres.

“What made this rescue outstanding was the collaboration across multiple agencies, the professional way the two incident management teams worked together and the number of well executed search and rescue techniques,” says New Zealand Search and Rescue Secretariat Director Duncan Ferner.

“The skills, dedication and experience exhibited in the award-winning rescues are typical of the search and rescue professionals that serve New Zealand.”

Missing tramper David Jensen was found on a scree slope after methodical searching, six days after being seriously injured in a fall.

It was not known if he was on the west or east side of the Alps, meaning SAR teams on both sides of the divide were required, with two incident management teams working together. 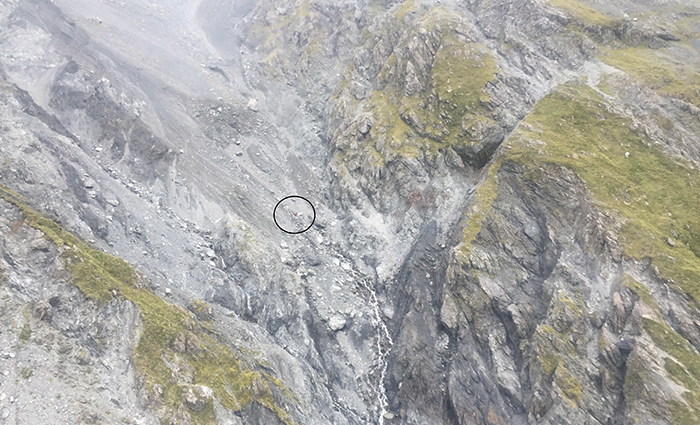 A speck of colour on this scree slope (circled) alerted SAR teams to the missing tramper's location.

After finding footprints in the shingle, SAR teams checked a nearby slope and noticed a small patch of colour, that turned out to be the tramper’s coat. A hand slowly raised in the air indicated he was alive.

He was rescued from the slope and taken to a nearby hut on a long-line, where he was treated for significant injuries and hypothermia.

“It was really time-critical with weather due to close in,” says Sergeant Phil Simmonds, Co-ordinator Search and Rescue, Christchurch Police SAR squad.

“If it had been an hour later it would have been a very different story. Having really experienced expert teams able to plan and execute each part of the search was key to the success.

“We had the right people doing the right jobs and working well together to get the right result.”

Phil says the highest part of the terrain was steep and foreboding, calling for the specialist expertise of the Aoraki/Mt Cook Alpine Cliff Rescue Team.

The tramper did not have a distress beacon – if he had, a search would have been undertaken as soon as it was activated and he might have been rescued in hours rather than days.

“The importance of taking a distress beacon with you when you are going into the great outdoors cannot be emphasised enough” says Phil. 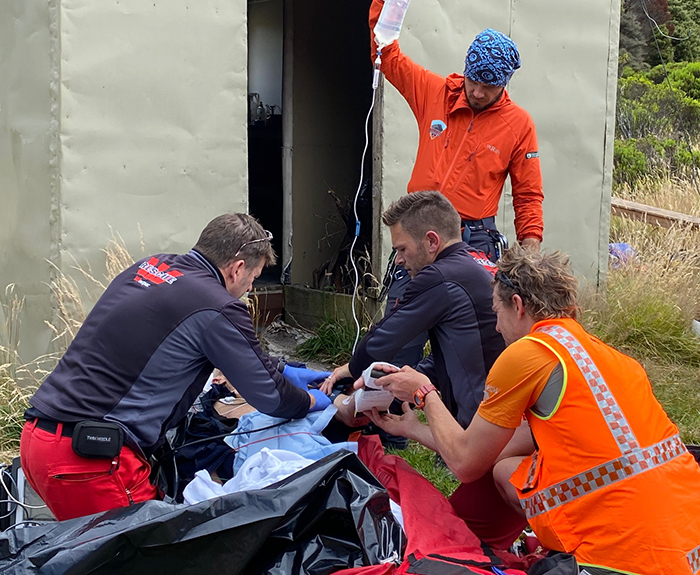 Whangārei Police SAR squad, Northland and Far North Land Search and Rescue; Whangārei Coastguard; Ruakākā Surf Life Saving Club; Skywork Helicopters; and Whangārei Fire Brigade were recognised for the search for a man with dementia who had been missing in poor weather conditions.

More than 120 people from the agencies and members of the public joined the search in urban, coastal and bush surroundings, often in extremely difficult terrain.

They found the man on day four in a creekbed, seriously injured from a fall and hypothermic. Sadly, he went into cardiac arrest shortly after they reached him and died, despite the efforts of search team members who conducted CPR for an extended period.

The rescue was beset by stormy, sometimes white-out, conditions and featured a challenging ascent of the 2275-metre summit by the Alpine Cliff Rescue Team. 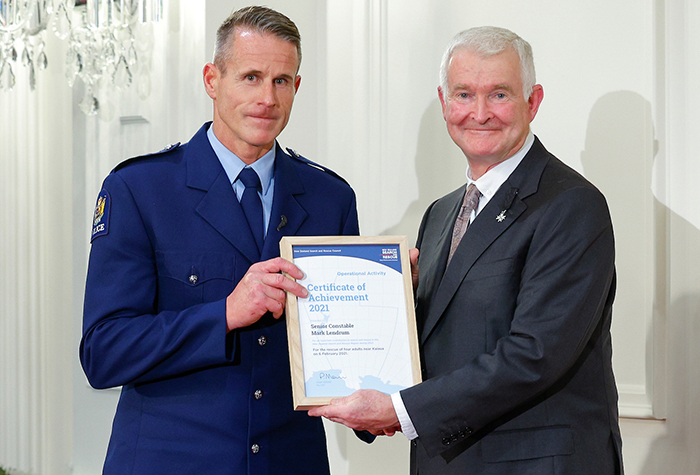 Senior Constable Mark Lendrum was a crew member on the Eagle helicopter called to the Firth of Thames, where four people were clinging to a seat cushion in the water after their boat sank.

Mark conducted a ‘hover-exit’ from the helicopter, fitted and activated water rescue devices on all four and helped with their winch rescue into the Auckland Rescue Helicopter Trust helicopter.

He volunteered to remain in the water so the patients could be more quickly transported to hospital and was later picked up by the Coastguard.

Watch how the rescue unfolded in the video, below:

More information on the 2021 NZ Search and Rescue Awards is available in the NZSAR media release.

Previous
The best wing and their cool auntie
Next
Aerial awesomeness