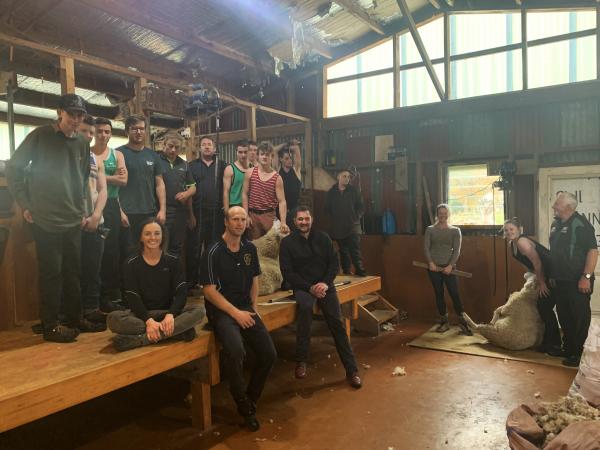 Home > News > Ten One Magazine > A good yarn, or sharing with shearers

While the tools of the trade have changed for Manawatū Detective Dion Kumeroa, he stays connected to his shearing roots by helping young shearers keep safe.

Dion recently attended an Elite Shearer Course in Feilding, speaking with the up-and-coming shearers about making good life choices, as well as his very diverse career background - which started with shearing.

“I starting shearing when I was about 14 with a good friend and his family and this eventually turned into a full-time job,” says Dion.

“I left school at 16 and worked hard and earned a shearing stand shearing about 250 sheep a day.

“For about 15 years I worked mainly around the Rangitikei, Taihape, Hunterville areas and also down south for a season in amongst show shearing and competing around the country.”

Speaking at the Feilding shearing course was a first for Dion - but a rewarding experience.

“Sometimes there is a negative stigma attached to the shearing community and they can be associated with criminal and anti-social behaviour,” he says.

“To help turn this around and make a positive impact it’s important for Police to work together with them to identify issues and provide education and support. It’s also an opportunity to showcase policing - especially for those considering a career as a police officer.

“I know Sergeant Blair Duffy from Queenstown also does this down south and I believe it’s a great prevention initiative that I plan to continue with here in the Manawatū.”

Dion gave the shearers relevant examples from his experience, both in his shearing days and current Police role.

“I spoke about alcohol and drug harm and how this affects shearers’ performance and how it always makes the industry look bad.

“Drink-driving and family harm were also discussed, as well as how relationships form in the shearing sheds and that, if faced with family violence, it’s vital to stand up and speak out.

“I think the shearers found the discussion helpful and I got some good questions and comments which showed they were genuinely interested.”

Due to the physical demands of full-time shearing, Dion decided it was time for a change and went into nursing.

He spent time working as a Psychiatric Assistant at Lake Alice, then completed his nursing degree and specialised as a Paediatric Nurse at MidCentral Health. He later became a community psychiatric nurse, working with youth and community agencies.

“After nursing I decided to become a police officer which was something I always wanted to do,” he says. “It’s been over 11 years in the job now and I really enjoy what I do every day.”

While Dion sheared part-time after leaving shearing, he no longer actively competes in show shearing, but still occasionally puts down his notebook and picks up his shears.

“I still have my shearing kit and shear about 100 sheep a year to keep me honest!”

Previous
A good yarn, or sharing with shearers
Next
Partnership puts people first