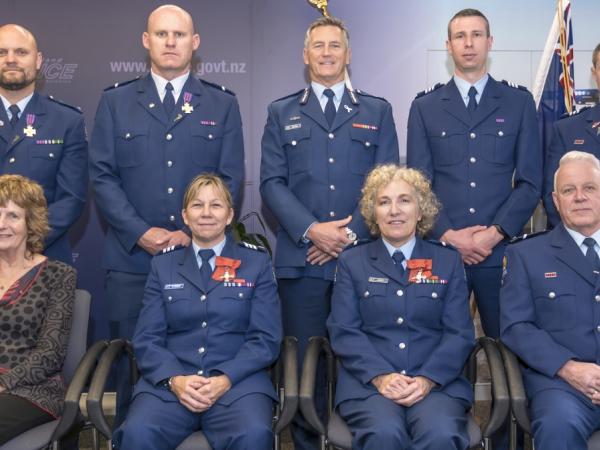 Congratulations to the seven officers whose courage and work in the fields of youth and prevention has been recognised with New Zealand Bravery and Royal honours.

They were invested by Governor General Dame Patsy Reddy in ceremonies at Government House in Wellington and Auckland.

Blair and Ben’s citation noted they acted with exceptional bravery in a situation of danger when they overpowered an armed gunman in a busy central Hamilton street. During the struggle the offender’s shotgun went off, injuring both Blair and the offender.

Chris and Ryan responded to a family violence incident in Papatoetoe where a man armed with knives threatened a woman and threatened to harm himself. The man charged the officers and tried to stab Chris before he could be arrested.

Deane was the first officer on the scene after a van plunged off a bridge into a river, killing the driver and leaving the passenger struggling in the water. Deane jumped in and spent 40 minutes in the water with the man.

Sergeant Su Robinson and Senior Constable Sue Guy, of Eastern District, were also at Government House, Wellington, to be invested as Members of the New Zealand Order of Merit (MNZM).

Also honoured was Sandy Ibbotson, Napier Community Patrols Coordinator, who was invested with her Queen’s Service Medal (QSM) today (24 May).

They were recognised in the New Year Honours for their youth and prevention work, most notably devising and implementing Wahine Toa, a supportive programme for young female abuse victims.

Commissioner Mike Bush says the Investitures are a very proud moment for the recipients, their families and Police.