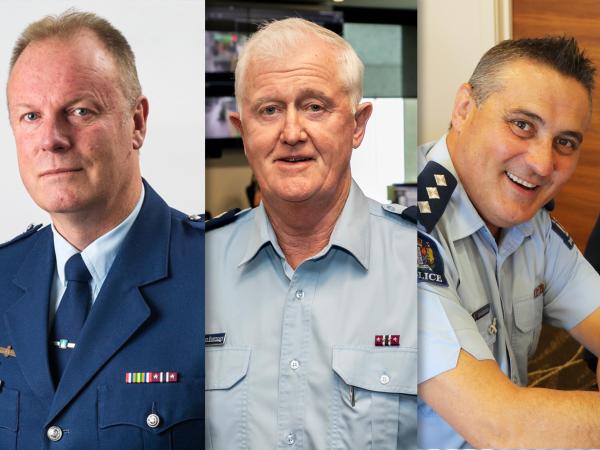 Home > News > Ten One Magazine > Honours at the triple

Three senior officers with a combined 113 years of service are recognised in the New Year Honours list for their service to New Zealand Police and the community.

Inspector Kieren Kortegast, Manager of the Police’s Southern Communications Centre, based in Christchurch, becomes a Member of the New Zealand Order of Merit (MNZM).

The three say they feel humbled and honoured.

Police Commissioner Andrew Coster congratulated them and said the honours reflected their deep commitment to doing their very best for their communities both in times of crisis, and in proactive prevention work.

John says his ONZM is an acknowledgement for the whole team.

“I’m only part of that extraordinary team,” he says. “It’s for all police in Canterbury who have been working with a real purpose and commitment over the past 10 years to do our very best for our people, and the community we serve every day.

“To have been part of a police team that has helped bring peace, safety, inclusiveness and unity to our community has been the greatest reward of all.”

Canterbury born and bred, John is a former teacher who joined Police in October 1987.

He worked in Wellington District; in Rotorua with Operation Austin, the investigation into serious historical offending by police; and was deployed in 2005 to Operation Phuket as the ante-mortem commander in the international disaster victim identification team.

On promotion to inspector in 2005 he returned to Christchurch, where he took the lead in the operational response to the 2010-11 February earthquakes.

He served as Kapiti-Mana Area Commander and then National Manager Training and Development at the Royal New Zealand Police College, before returning to Canterbury as district commander in 2015.

In this role he led the response to the 2016 north Canterbury earthquakes, Port Hill fires, the 2019 mosque shootings and the operation around the killer’s sentencing.

“I’m exceedingly proud of the way Canterbury police responded to the extraordinary array of emergencies we’ve been faced with, but policing goes deeper than response,” he says.

"The Canterbury team adds enormous value to its people through delivering innovative prevention and safety in our homes, on our roads and in our community.”

He’s particularly proud of the pioneering work on community justice panels, which started in Christchurch as an alternative way of dealing with low-level offending in partnership with iwi, social services and others. This has evolved into the nationwide Te Pae Oranga programme.

John was made an Officer of the Most Venerable Order of St John (OStJ) in 2020.

KK is a near 48-year veteran, joining as a cadet in January 1972. All his career has been in Christchurch, in frontline and CIB roles before an intended 12-month stint in South Comms in 1996. KK is still there, as manager for the past 17 years.

“I love the job,” he says. “It’s exciting, challenging and the technology keeps advancing. I’m privileged to lead a great group of people in a very busy environment.”

KK says the MNZM is shared with his family, colleagues and others.

His citation acknowledges his exemplary leadership during the 2010 and 2011 earthquakes, relocation of South Comms into Te Omeka in 2018 and crises including the terror attack.

“The calibre of staff working in emergency call centres is exceptional, and they do their very best in dealing with multiple calls from people in crisis.

"At the same time our dispatchers are drawing on this information, assigning response units, and liaising with staff in the field.

“It’s a tribute to staff that they manage the demands so well.”

Elsewhere, KK spent nearly a decade fundraising for the Life Education Trust through his involvement with the Round Table Service Club and won the organisation’s annual award in 1990. He’s also a former board member and chair of St Anne’s Woolston Catholic School.

Sam’s MNZM will be a double celebration – and a good way to mark his 56th birthday on New Year’s Day.

The cake can wait, however - he’ll be out on the day working with his staff at Rhythm and Vines.

“I’m incredibly proud to lead an amazing team of 150 people,” he says.

“Everything we do is motivated by the love of the Tairāwhiti region. Connecting with people counts.”

Sam worked in Auckland and Hawke’s Bay before Tairāwhiti, where he has been area commander for 10 years.

He helped establish Police’s Cook Islands Internal Support Network in 2016; he has been chair of the Safe Tairāwhiti Community Trust, is a member of the Manaaki Tairāwhiti governance group and a keen supporter of policing through prevention.

He helped establish the Ngā Ara Pai programme, helping 18 to 24-year-olds get their driver licence.

Drivers stopped with no licence are given an infringement with compliance which sees them referred to the scheme for mentoring and help to pass their licence. Once they’ve passed, the infringement is waived.

“Hundreds have gone through the scheme with an 80 percent success rate. Passing your driver licence is a win-win for everyone. Instead of a ticket, passing your licence is a ticket to a future.  It opens doors for mobility, education and employment.

"Building relationships with young people helps increase trust and confidence in Police. It's great to see them grow, flourish and become legal drivers."

He says programmes aimed at reducing family harm - such as Te Hāhi - and providing safe networks for families, including the elderly, are crucial.

“I’m proud to be associated with a number of community groups that have brought about positive change for whānau to flourish in Tairāwhiti.”

Investiture ceremonies will be held on dates to be confirmed in 2021.
Previous
WATCH: New cops don't miss a beat
Next
Purr-fect ending for kitten rescued from Auckland’s motorway