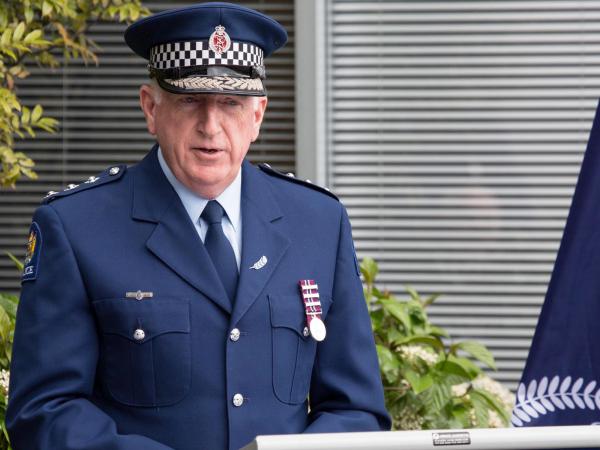 Inspector Pat Handcock retired this week after 44 years of proudly serving the community.

Pat was just 17 when, in January 1974, his parents dropped him off at Auckland railway station to board an overnight train for Wellington — final destination, the Police Training School at Trentham.

Pat, who grew up in Onewhero, Auckland, was a farmhand before joining Police.

“I saw a Police recruitment advert in the Herald and gave the recruiter a call. About seven months later I was on my way to the college,” he says.

He was a member of the No 18 George Claridge Cadet Wing and, after graduating in 1975, was posted to Napier.

“I’ve experienced a lot of change in the way we police and we’ve definitely made huge improvements in technology.

“I don’t miss the days of communicating station-to-station via the teleprinter or spending night shift in the watch house manually updating the police gazettes.”

In 1977 Pat joined the local CIB as a Detective-on-Trial. In 1981 he was involved when NZ Māori played the Springboks during the Springbok Tour.

“I was tasked with observing the protesters and sending intel back to inform the police operation,” he says. “I climbed up one of the light towers to get a better view — I was about 35 metres up from the benches.”

In 1981 Pat moved to Auckland City CIB and worked on the Crime and Drug squads. In 1987 he was promoted to Detective Sergeant, working across Otahuhu and Takapuna until the mid-90s.

“The demand on police in Auckland in the 80s was significant. There were a lot of serious crimes committed - I remember there being 17 homicides in one year, along with a string of aggravated robberies.”

One memorable case was Operation Pond, the investigation into the Birkenhead BNZ aggravated robbery in July 1991. Pat was second in command and received a Silver Merit Award for his work.

In 1997 became officer in charge of Palmerston North CIB. He qualified as an Inspector in 1999 and became Operations Manager at Central District Headquarters.

In this role Pat was tasked with creating a condolence book on behalf of Police after the 9/11 terror attack.

A new opportunity came in 2014 when Pat represented Police as a Project Lead for the introduction of the Vulnerable Children’s Act 2014.

Pat remembers his community policing deployment in Timor-Leste as a highlight. Between 2012 and 2015 he spent a total of 18 months in a mountainous area 50 kilometres from the capital Dili. He lived locally and was very much part of the community.

“When I reflect on my time in Timor-Leste, supporting community policing was crucial for local policing development,” he says.

“There were definitely challenges for local police but, with our support and their determination, they went from a disorganised group to a professional organisation.

“Like any police force they still have hurdles but it was a privilege to help a community dealing with tragedy and adversity to rebuild and be triumphant.

“The resilience of the Timor-Leste people is heartening and they are delightful people to work with and live among.”

In 2016 Pat returned to New Zealand, working in Deployment. The same year he was made an Officer of the New Zealand Order of Merit (ONZM) for services to Police.

From 2005 to 2014 he was Chair of the Palmerston North Safety Advisory Board (SAB), developing it into a strong team with all government agencies represented.

Under Pat’s leadership SAB initiated, implemented and supported more than 30 community safety projects – from engagement with refugee and migrant communities, to burglary reduction to research into alcohol harm. Many were recognised as best practice internationally.

Pat was a driving force behind Palmerston North achieving International Safe City Status in 2014. “My main passion has always been what we can do to make our communities safer,” he says.

“We know there’s not one fix for this, it needs to be a collective effort with sustainable community partnerships and a balance between prevention and enforcement.

“I fully encourage policing as a career — I wouldn’t swap my experience for anything.”