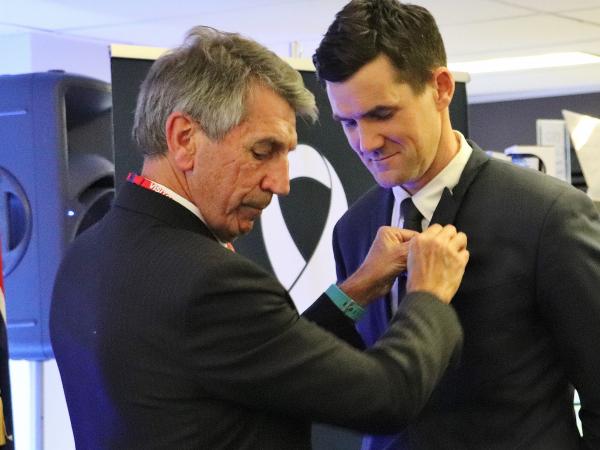 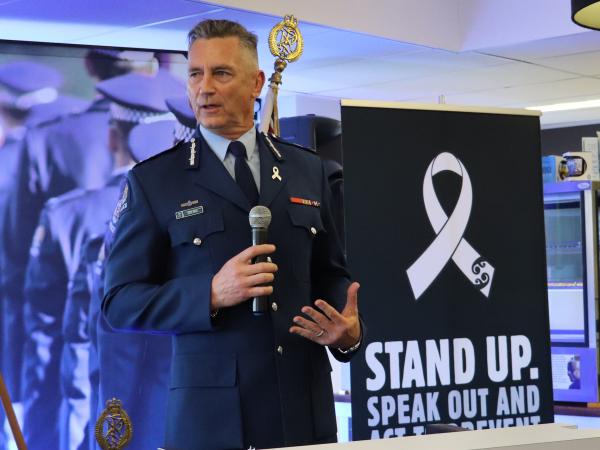 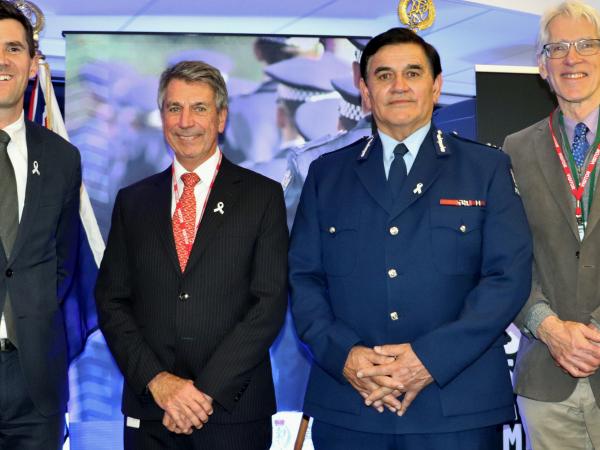 Home > News > Ten One Magazine > Lending mana to the cause

White Ribbon and Yellow Fever combined as Police hosted a celebration of non-violence and inclusivity.

Police National Headquarters (PNHQ) was the venue as Wellington Mayor Justin Lester was inducted as a White Ribbon Ambassador and local A-League football team Wellington Phoenix - whose diedhard fans call themselves the Yellow Fever - were presented with a Police commendation for their youth and community inclusion work.

Both Mayor Lester and the Phoenix led, championed and drove projects which were so significant to local communities and “absolutely the right thing to do,” Commissioner Mike Bush, already a White Ribbon Ambassador, told those present.

Mayor Lester said he brought to the ambassadorial role two important jobs: that of son, and that of father. “It’s incumbent on all of us to not only wear this ribbon but prioritise the values it represents,” he said.

While there was no violence in his own upbringing, he watched his single mother on a benefit “decline” in response to societal attitudes that beneficiaries were bludgers, parasites or no-hopers.

“I like to think these days we are in a much more enlightened place now. We lift people up, we support them and give them hope. We don’t knock people down.”

White Ribbon boss Rob McCann welcomed Mayor Lester to the ranks of ambassadors, underlining the importance of men talking to other men. “As a community, as a country, we have to own up to this violence which infests our society.”

Presenting Mayor Lester with his ribbon, Judge Peter Boshier, Chief Ombudsman and White Ribbon Ambassador, told him: “You are a very visible leader. People identify this white ribbon you will now wear as very special and very real.

"It shows we care, we act, and if we are men we own the issue, which is very much ours."

A different kind of community activism was next marked, with acknowledgement of NZ Football and Wellington Phoenix for their work providing opportunities for young people in the Porirua area to experience the beautiful game.

The programme started two years ago with a single bus to take Porirua youth to a game at Wellington’s Westpac Stadium. This year six buses are laid on, with season passes to give those onboard free entry to games.

As Porirua Mayor (and White Ribbon Ambassador) Mike Tana said, not only was it a first trip to the stadium – and football - for most of them, it opened much wider horizons.

Deputy Commissioner Wally Haumaha paid tribute to all those present, especially the White Ribbon ambassadors. It was an honour to honour Mayor Lester and all those prepared to say ‘it’s not ok.’ All those who supported Police in their work, whether it be family harm or inclusion and diversity, deserve our thanks, he said.

Inspector Rakesh Naidoo, who organised the event, says the principles of non-violence and inclusion are fundamental to Police's mission and values.

"Police all too often see the consequences of violent relationships and divided communities," he says. "This was an opportunity to honour those in our communities who are working to make this a more inclusive, harmonious and safer country."