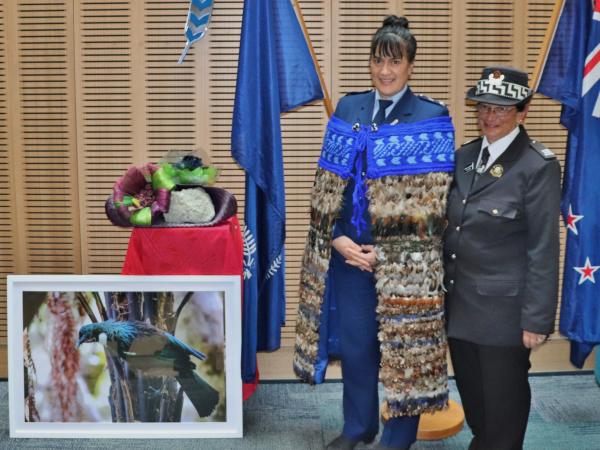 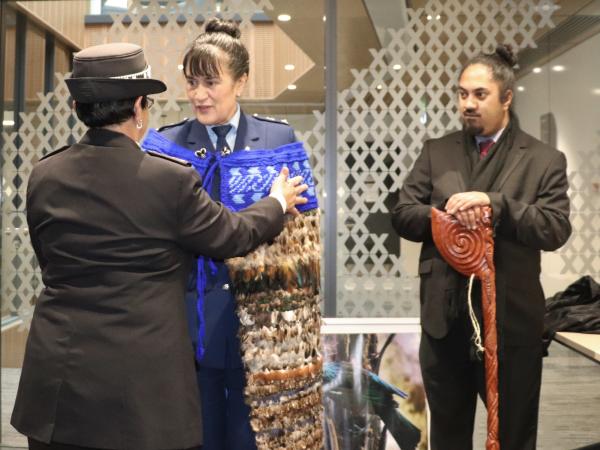 Eastern Police have had a very special korowai gifted to them.

Well-known Ahuriri Māori Warden Zita Smith spent three weeks of lockdown creating the cloak from native bird feathers including kiwi, tui, kererū, pūkeko and weka. The woven blue top of the korowai represents the Ahuriri area and the tides and waves along the East Coast.

Zita has been a Māori Warden in Napier for 28 years, and spent 27 years doing security at the Warehouse in Napier.

“Police have always been there for me when I needed them throughout my time at the Warehouse and as a Māori Warden and I wanted to repay them by creating the korowai,” says Zita.

“Over the years I have created 20 korowai for various organisations and people, but this is my last so it was quite an emotional journey creating it.”

Exactly when the korowai is to be used needs to be finalised, however Zita hopes it can be incorporated into the welcome for new recruits to Eastern Police.

When Zita’s daughter heard of her plans to create the korowai she sent up a special framed photo of a Tui given to her in the South Island to also gift to Eastern Police.

“The time, energy and aroha you have put into this korowai makes it incredibly special,” she said.

And as if she wasn’t busy enough creating the korowai, Zita also managed to fit in baking for local doctors and nurses during lockdown.