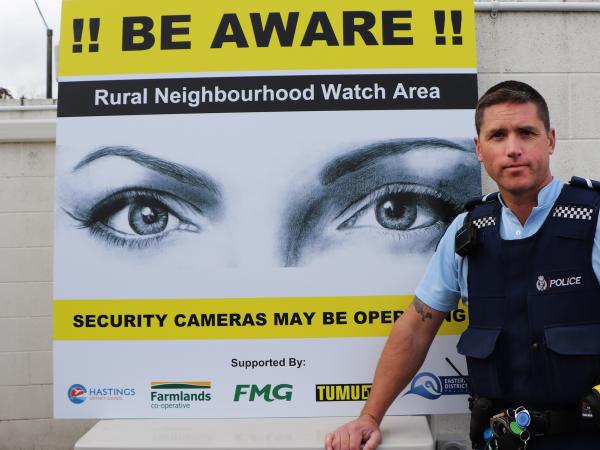 If you get the feeling that you’re being watched when you’re driving in rural Hawke’s Bay, you might just be right.

Large roadside signs are being erected to warn would-be offenders of the presence of active Neighbourhood Support groups and reassure residents in rural areas that they are being looked after.

The project – which will replace dilapidated old signs and install signs in new locations around the Hastings rural area – was led by Hastings Rural Prevention officer Senior Constable Greg Andrew, in partnership with Farmlands and other local concerns.

He started working on the project in late 2015 after noticing the dozen roadside Neighbourhood Support signs around the area – which he thinks may be around 30 years old – were no longer up to the deterrent job.

The sponsors of the old signs – FMG and Tumu Timber – had no record of them, so Greg set about building new partnerships. He found willing support, particularly from the Farmlands cooperative, and by 2018 they had secured enough funds for 20 new signs.

The project will see old signs replaced on council-owned road verges and others installed in new locations on private land. The first is due to be installed in remote Kereru Road next week.

The new locations have been strategically chosen as main routes through the many valleys which cross the area.

Greg says buy-in for Neighbourhood Support has been good among the small communities and isolated farms which dot the more-than 1500 square kilometres of the rural area.

They are prone to theft, burglary and other forms of offending, from boy-racer activities to drug cultivation and poaching.

“That makes them uneasy,” he says. “Myself and the other rural officers field calls about it all the time.

“There’s a perception among some rural residents that Police aren’t overly interested in dealing with their complaints and concerns so I’m trying my utmost to turn that around.”

There is interest in replicating the project in other areas.

Greg’s supervisor, Sergeant Su Robinson, says he relentlessly built up the partnerships to support the signs – with FMG, Tumu ITM and Hastings District Council as well as with Farmlands – over years.

“Greg thinks a little bit outside the square and is passionate about rural communities,” she says.

“That’s what’s brilliant about the Police High Performance programme – it’s given me the ability to let my staff go out there and use their skills, knowledge and experience and bring back the goods.

“I’m really quite proud of what he’s developed. He’s done a great job.”