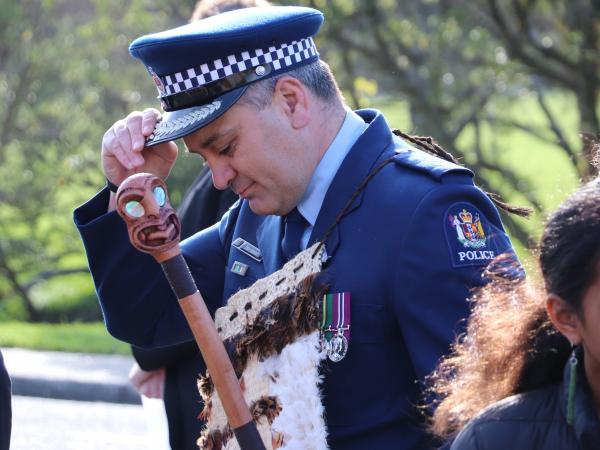 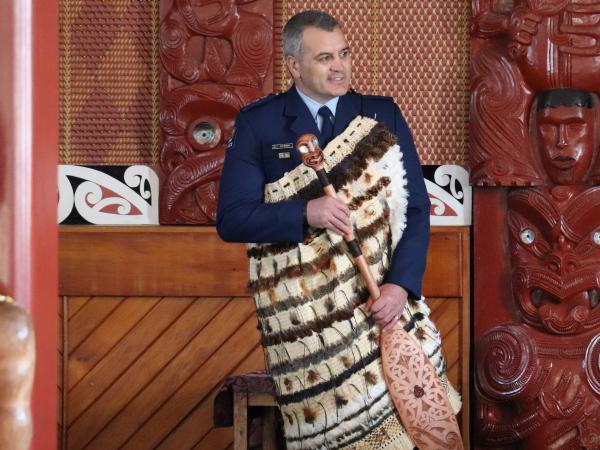 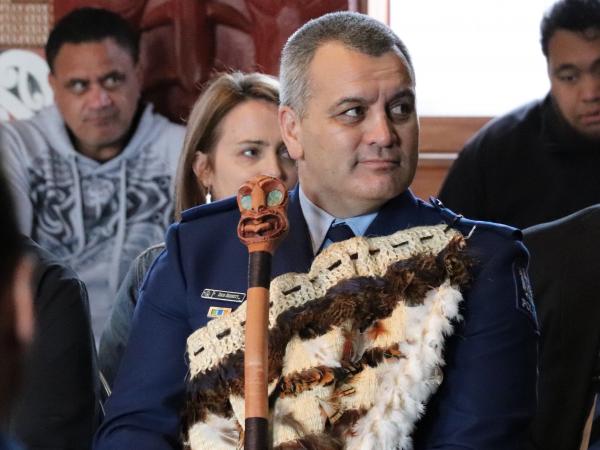 The pōwhiri was in line with the traditions of Te Atiawa iwi, who were keen to welcome Dion (Ngāti Paoa and Ngāti Hako) as he had formed relationships as part of his previous role as Māori Responsiveness Manager for Wellington District.

Kura Moeahu, kaumatua and marae chairman, spoke about the positive relationship between iwi and Police. Te Huringa O Te Tai was the strategy that has made that possible, he said.

Dion says he was extremely humbled by this special occasion. The significance of the role he has stepped into is a responsibility he accepts and carries with reverence, both as a Māori leader and a police officer.

He envisions a mana-enhancing policing service bringing people together just like the unifying force of te Awa Kairangi, the Hutt River.

“In every interaction we have, whether it’s dealing with offenders, victims, partners or the general public, I want local police and the local station to be seen as part of the solution and not the problem,” he says.

“Being mana-enhancing acknowledges that there is more to someone than what we see. We can choose to leave them in a much better position than before they came across our path. At the heart of it, people just want to connect.

“I would like for Te Awa Kairangi Hutt Valley to be known for growing great people. A place where the wairua (spirit) of our tamariki is grown and nurtured.

“Stepping into this role, it is my desire to say and do things that make our collective tamariki proud, and inspire them to be police officers.”

Addressing the pōwhiri, Dion spoke about a recent excursion to Stokes Valley which reminded him about the importance of genuinely connecting with people.

He stopped at a busy bakery and sat down to eat lunch. Soon, a man started talking to him about the bus company he worked for. Another sat at the next table and shared how bored he was in retirement. Both men wanted someone to share their experiences with.

It was, he said, a timely reminder about overcoming bias by creating human connections – kanohi ki te kanohi. Bias is challenged when you stop to really see the person in front of you.

Dion says taking the opportunities that came his way and giving things a go got him where he is today. More importantly, it was the people who made the greatest difference.

In 2009, he says, while working as part of the diplomatic protection team at Turangawaewae Marae, he was terrified by the thought of someone speaking to him in Māori because he could not speak te reo.

When he was asked a question in Māori, Sergeant Wayne Panapa spoke up with words which have echoed throughout his personal life and career - “He’s all right, he just lacks a bit of the wairua at the moment.”

Since then, Dion’s journey has been one of rediscovering his identity and using his influence and leadership to build others up. He is learning to kōrero Māori.

“What Dion aspires to and is committed to bringing to the stewardship of Te Awa Kairangi Hutt Valley reflects not only the mission of New Zealand Police but the vision of Te Rūnanganui o Te Ati Awa – Reaching for the stars, aspiring for the greatness in all people,” he says.

“Dion has a strong commitment to strengthening partnerships, reducing the input into the Justice Sector pipeline and increasing the public’s trust in Police.

“He has the full support and backing of Wellington District, local iwi and the wider community as he leads our efforts in the Hutt Valley.”

After graduating with Recruit Wing 175 in 1997, he spent 15 years in Hamilton before moving to Wellington. He has worked in various local and national roles including CIB, Special Tactics Group, Armed Offenders Squad and, most recently, as Māori Responsiveness Manager.

Previous
A gift that changes lives
Next
Prevention in top gear