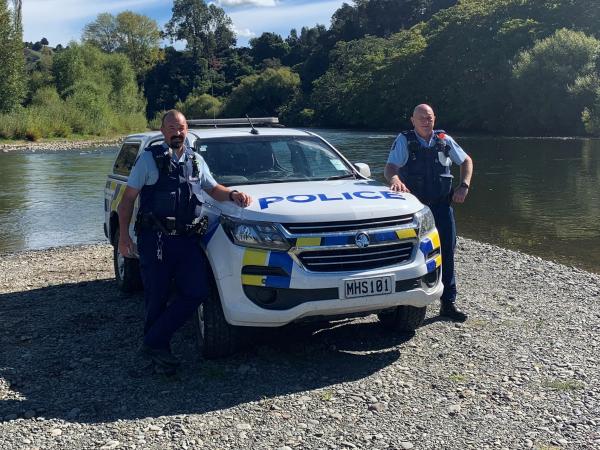 ​Ruapehu officers teamed up with a local farmer to catch poachers red-handed at Raurimu.

On a recent sunny Wednesday morning, a farmer off State Highway 4 Raurimu noticed a ute parked on the side of the road.

He saw two men exit the vehicle with a firearm, jump the fence to a neighbouring property and shoot one of the wild deer grazing there.

The farmer called Police and National Park Constable Mark Bolten, who was only a few minutes away in Ōwhango, was shortly on the scene.

“When I arrived, the ute was still there and the farmer told me that the two men had run into the bush upon seeing me arrive in the patrol car,” says Mark.

“I spoke with the driver of the ute, got his details, and asked him a few questions.

“He responded with a few creative explanations as to what he was doing, and during this time I got a few more units to come and assist from Taumarunui – Senior Constables Peter Marks and John Tito.”

Mark and the team formulated a plan and let the driver go on his way to work. Mark gave his mobile number to the farmer to call him as soon as he saw the two men who ran into the bush.

When the officers left, the farmer saw the two men emerge from the bush and make their way to the road.

Within seconds he called Mark who made his way back, with Peter and John, and they surrounded the men in an enclosed area of bush.

“We voice appealed to the men to come out and about 10 seconds later they walked out,” says Mark.

The two men, aged in their mid-20s, and the ute driver, in his early 30s, all from Taupō, were spoken with and each charged with unlawful hunting.

Mark and the team also seized the firearm that was used and are working their way through the revocation process for the men’s firearms licenses.

The men are due to appear in the Taumarunui District Court on Thursday 7 April 2022.

“It’s the season for poaching with the Roar in full swing and we are getting a few more vehicles into the area,” says Mark.

“It’s very brazen to poach in broad daylight but it also shows that it’s opportunistic.

“The property owner was very happy about us catching the poachers and we were very grateful for the farmer who alerted us to the suspicious behaviour. He felt like he was part of the blue team and was more than happy to assist.

“What’s great about this is that he will tell his neighbours and friends, and this will spread the word for us around prevention and reporting suspicious activity when you see it.”

The maximum penalty for unlawful hunting is two years’ imprisonment and/or a $100,000 fine.

“It’s a really hard crime to catch people committing as by the time we drive from one rural area to the next, they’ve bolted," says Mark. "Evidence can also be an issue as a farmer might just find a carcass.

“One of the things we focus on as rural staff is our prevention work, of which we do a lot.

“We have instituted a phone tree here at National Park and it’s amazing the power of conversations - even the local mailman was talking about it.”