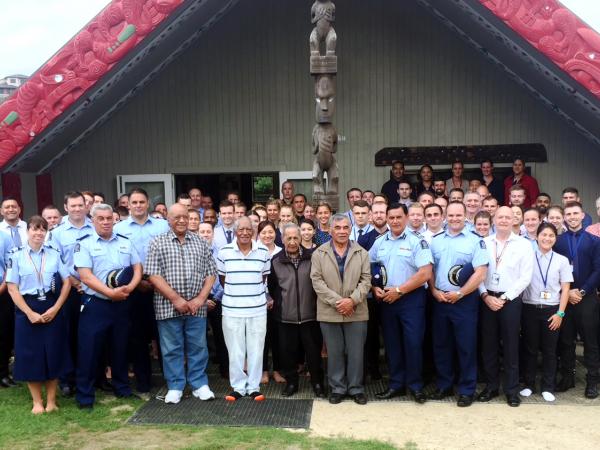 The latest group of Police recruits has received a profound insight into the Māori world.

On the third day of their initial training at The Royal New Zealand Police College (RNZPC), the 60 members of Recruit Wing 313 were welcomed on to Horouta Marae, Papakowhai, for a two-day noho marae.

Sergeant Chris Kerekere, of the RNZPC School of Initial Training, says fewer than half the recruits had spent any significant time on a marae.

“If we want to be ahead of issues affecting Māori in our communities, we have to know where they come from and the tikanga [customs] with Māori,” he says.

“It was very, very well received. It took our people right out of their comfort zones - including our initial training staff - and was a great opportunity for them to connect as a group in a very relaxed environment.”

After their welcome, the recruits had presentations on subjects including the Treaty of Waitangi, the iwi-led prevention strategy The Turning of the Tide and responses to Māori.

There were waiata, or songs, they ate kai together, and eventually slept in the wharenui.

On day two they heard from Māori, Pacific and Ethnic Services staff about iwi panels and alternative resolutions.

The recruits also took their solemn undertakings at the marae before an emotional address by Waitematā District Commander Superintendent Tusha Penny to close the noho marae, before the short journey back to the RNZPC.

Chris says the feedback from the first noho marae was hugely positive – including from recruits with more experience of marae protocol.

“Those tauira [students] were humbled that their introduction to our organisation was in this format. It was a way of acknowledging those who knew the kaupapa as well as an introduction for the others.”

The noho marae will be a feature for all wings, with the next, for Wing 314, next week. “We’ll keep reviewing it [noho], and improve this experience for our trainees - but we’ve got off to a very good start,” says Chris.

Deputy Chief Executive Māori, Assistant Commissioner Wally Haumaha, says it is fantastic to see recruits getting the experience of learning on their local marae.

“This is a very practical application of how the college is actioning Police values of Commitment to Māori and the Treaty and Valuing Diversity,” says Wally.

“My congratulations to Inspector Iain Saunders and Sergeant Chris Kerekere for the work they and the team have undertaken to develop and implement noho marae as the new standard. Ka mau te wehi!”