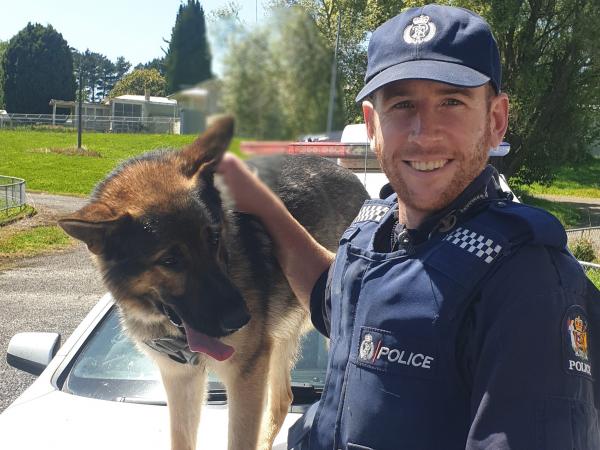 Shaun and Justice – who graduated from the Dog Training Centre at Trentham on 12 December – were heading to the Waikato Dog Section base two nights later to start work when they heard on the radio about a job 20 minutes away and diverted.

A stolen car had fled a checkpoint at Hamilton. The offenders had run away then been seen again near a railway line.

Shaun admits he was unsure of how his first job would work out – and it did not start well.

Justice picked up a scent and they tracked over a fence through some properties, across a road and down an alley, but Justice started to become unsure.

“Something didn’t feel right,” says Shaun. “Following some advice an instructor had given me on a training track, I looked around and asked a guy on his porch if he had seen two guys run past.

“He described them to a T and said ‘Yeah they were exactly where you are about 30 minutes ago - running the other way’.

“I realised I had back-tracked the offenders. I took the dog back to the start point, feeling pretty deflated and thinking I’d just wasted a lot of time”.

Back at square one he decided to give it another crack. Justice picked up on the offenders' scent and, after tracking about 80 metres, indicated towards a property.

“I yelled ‘Police dog handler - come out now’ and the first offender came out from a bush beside a fence.”

While Shaun was dealing with that offender, a second popped up about 60 metres away. Shaun challenged him but he ran and jumped a fence.

“I had to wait with the first offender until another officer could take him from me. We still had good cordons in place and that forced the second guy to hide in a shed two streets over. I was able to locate him as well.”

Shaun joined Police as a member of Wing 290 in May 2015, with the goal of becoming a dog handler. He worked in Papakura and Blenheim before transferring to Waikato to take up a trainee dog handler position.

He says he was stoked to get off to such a flying start.

“It was a pretty good feeling getting both of them after I thought I had completely mucked it up.

"I could see the dog was pumped after finding the second guy and I thought ‘Bring on the next one’.”

“It has to be a record to make not one but two catches within minutes of your first operational shift,” he says.

“I'd texted Shaun with a good luck message and couldn't believe it when he called to let me know the result.”

Previous
Recruiting, guiding, educating and awhi
Next
A day out at Rātana