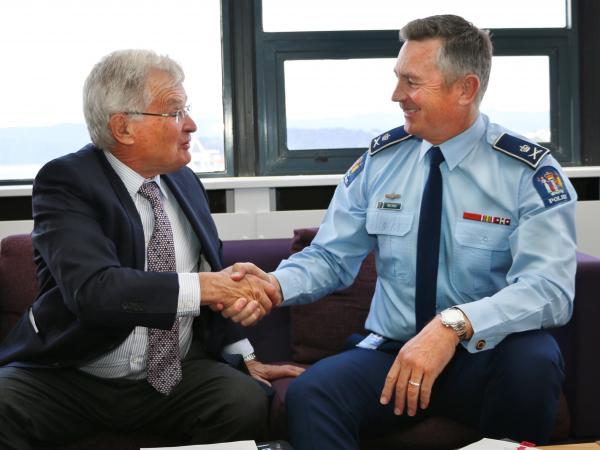 Police staff have a new opportunity to travel and study internationally with the launch today of the Woolf Fisher Police Fellowship programme.

Constabulary and non-constabulary staff nationwide will be eligible for one of 15 Fellowships awarded each year for excellence, dedication and outstanding service to policing.

The award will include a certificate of recognition and a fully funded international trip to undertake a pre-agreed programme of study or an observation placement with a policing-related organisation.

Around 40 per cent of the travel period will be set aside for study or observation. The rest would be used at the Fellow’s discretion - and Fellows will be able to take their partners.

The Woolf Fisher Trust has been offering Fellowships to school principals and teachers since 1961. This is the first time they have extended them beyond education professionals.

Sir Noel said the Fellowships would recognise “the quality of people who commit themselves to New Zealand”.

“It’s about excellence and dedicated service in Police,” he said.

“It might be someone who has been sitting behind a computer for two-and-a-half years… or it might be a constable in a little town who goes above and beyond the call of duty.

“It’s over to their colleagues to make the recommendations.”

Commissioner Mike Bush offered heartfelt thanks to Sir Noel and the Woolf Fisher Family Foundation. He said the recognition would mean a huge amount to successful nominees as much police work is done out of the public spotlight.

“For the Woolf Fisher Family Foundation to say ‘We want to do something for those good people of New Zealand Police’ will mean a huge amount to our people,” said Commissioner Bush.

“We’re very grateful to the Woolf Fisher Family Foundation for thinking of Police and establishing this programme.”

Fellowships are available for staff up to and including the rank of Inspector, and non-constabulary equivalents.

Ten Fellowships will be for six weeks, and five will be for eight. There is no minimum level of service required but nominees must have demonstrated a sustained level of excellence and commitment to Police, and be of outstanding character.

Staff must be nominated without their knowledge – the Foundation insists the award is a complete surprise.

The Police Honours and Awards Committee will collate nominations and provide a shortlist for consideration by an internal panel comprising Executive Leadership Board and Senior Leadership Team members.

The Sir Woolf Fisher Family Foundation will make the final selections. Successful nominees will then prepare a proposal on their intended travel and study topic, with support from the Evidence Based Policing capability within Strategy Group.

Previous
Police puts Te Reo on the road
Next
Oza clever boy then!