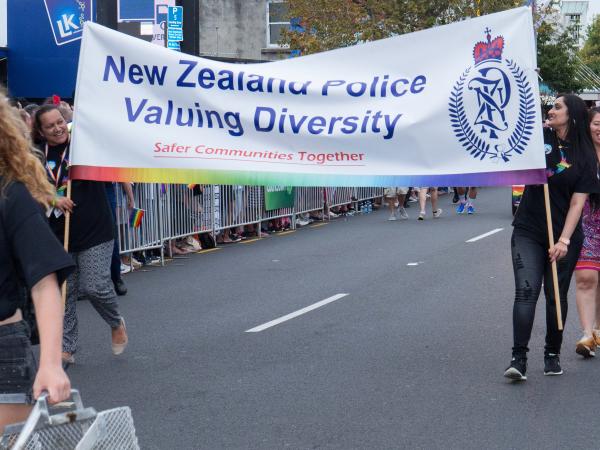 Work is under way to include a third gender on Police forms and information systems to cater for people who do not identify with the traditional options of M or F.

The move would bring practical benefits for Police staff and people they deal with from the rainbow communities, says Inspector Tracy Phillips, Rainbow Connections Diversity Liaison Officer in Tāmaki Makaurau.

“We don’t live in a black-and-white society,” says Tracy, who presented a paper on the subject to Rōpū Whakahaere, Police’s Senior Leadership Team.

“Imagine if we had a choice of only two ethnicities on our forms. No one would think that’s OK. Similarly we accept that not everyone fits into the ‘male’ or ‘female’ box.”

Police already has a policy relating to searches of transgender or intersex people in custody, which states that staff should respect the way the person describes themselves and their preferred pronoun – he, she or they.

However such information is not captured on databases such as the National Intelligence Application (NIA), Comms Centre systems or, in the case of Police’s own staff, MyPolice.

The SLT paper cited a case in which victims were recorded as male - with nothing in NIA to indicate they were transgender. The result was confusion for staff and an approach which was “experienced as being deeply insulting and disrespectful”.

This has a flow-on effect with Corrections, who may need to consider issues such as required medication and correct or preferred names when people go on to prison.

Tracy says building such considerations into Police systems would help staff deal appropriately with people they meet and in keeping with Police’s values – not least Professionalism, Respect, Empathy and Valuing Diversity.

“It’s a matter of recording information accurately,” she says. “If you’re dealing with a transgender man the system should reflect details such as their preferred name.

“To do our job in respect of all our values staff need to be thinking ‘I need to take something different into account’.”

The work under way includes consultation with rainbow communities and partner agencies which use Police data, such as the Ministry of Justice.

“Trust and confidence in Police is around 10 percent in rainbow communities,” says Tracy. “People from these communities aren’t reporting offending, and often not talking to us. This is another way we can show our commitment to those communities goes beyond the surface.”