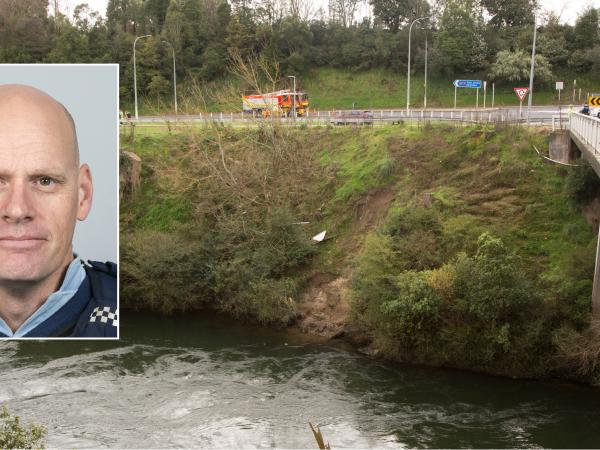 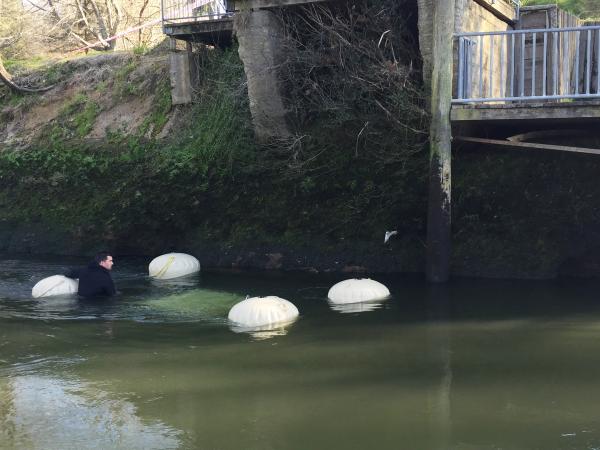 Off duty but always a cop - Senior Constable Scott Quate might not have been working but he knew what to do when he came across an unfolding tragedy.

Scott, of Hawke's Bay Strategic Traffic Unit, was visiting Cambridge with his partner and baby daughter for his mother-in-law’s funeral. They were en route to meet family at lunchtime on Saturday when they found themselves in stationary traffic.

A vehicle with two occupants had just gone through the barrier at Ferguson Bridge on the outskirts of town, plunged around ten metres down a steep bank and sunk in the Waikato River.

Scott says he jumped out of his car and looked over the bridge.

“There was a guy in the water yelling for help,” he says. “I ran across the bridge to the other side and saw a second person, a woman, float to the surface, face up and unconscious.”

Scott scrambled down the steep slope, stepped into the freezing water and very quickly found himself out of his depth.

"The current carried me about ten metres. There was a branch hanging down and I managed to hook my right arm over it. I reached out and grabbed the woman and pulled her over.”

The man, who Scott described as fatigued and distressed, managed to pull himself over and grab the branch.

“We were clinging there. I was trying to calm him down and keep my head above water.”

After about five minutes some men at the water's edge were able to throw a strop to Scott. He secured it to the unconscious woman and the men hauled all three to the shallows.

There Scott began artificial respiration and chest compressions and succeeded in clearing water from the woman’s lungs.

The men pulled her out of the water and further up the bank, where an off-duty nurse supervised resuscitation attempts until paramedics arrived.

By the time Scott got back up the bank, another family member had arrived with towels and he made the short drive back to his mother-in-law’s house for a shower, nursing a bruised and rope-burned arm.

It was the second time he had performed CPR in his 18-year career – and both times he was off duty.

The car was floated by members of the Police National Dive Squad and recovered on Thursday - a testing and difficult operation, says squad OC Senior Sergeant Bruce Adams, even with the river flow reduced for the occasion.

Scott says he was very sorry to hear the woman did not survive. “Our thoughts go out to her family,” he says.

“I’m very grateful to the guys who pulled us out and took over CPR. We couldn’t have got out of there without them.”

Scott's boss, Eastern District Commander Superintendent Tania Kura, says while the crash had a tragic outcome, Scott was to be congratulated.

"He acted with great courage and presence of mind in very difficult circumstances," she says. "I extend my sympathies to the family concerned but no one could have done more than Scott did to try to bring about a happier outcome.

"His selfless actions reflect the determination of our Police staff to make this a safer country for all."

Previous
A taller work story
Next
Champions of the world!