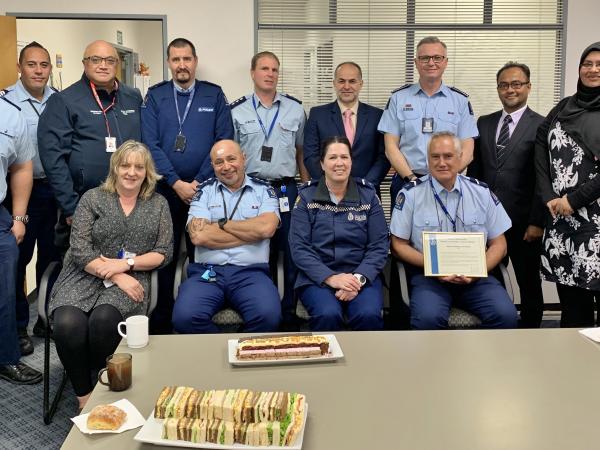 Dunedin Senior Constable John Karaka was recently recognised with a District Commander's Commendation for his dedication to the local community in response to the tragic events of 15 March 2019 in Christchurch.

“The events in Christchurch deeply affected our communities, and the Dunedin Muslim community, in particular, felt unsafe and vulnerable," says Paul. "There were direct impacts in the Southern District with families and friends of victims residing locally.”

At the time of the attacks, John was working as an ethnic liaison officer and was immediately seconded to support the wider Māori, Pacific and Ethnic Services response.

He quickly sprang into action and contacted local leaders in the Muslim community, including the President of the Otago Muslim Association, within hours of the attack. He organised a hui at a local marae for the following day with affected communities and other dignitaries, including mayors and Members of Parliament.

“In both my professional and personal capacities I have established relationships with ethnic communities in Dunedin, and open and respectful communication continues to be a key factor in the success of these relationships," says John.

“While I was very grateful to be formally recognised, the commendation came as a bit of a surprise to me as providing the best service to communities is something police staff do every day, and working as a team is really the key to being effective."

John gave the community a consistent point of contact with Police during the response and continues to provide ongoing support through the important relationships he has fostered. John continued to work on his days off to ensure vulnerable people were heard and felt safe and secure

This was demonstrated by his home visits to Muslim families whose children were too scared to walk to school, to facilitating discussions with ethnic community leaders.

“John’s open, empathetic, and respectful approach was a stand-out when engaging with those that needed comfort and reassurance," says Paul. "The Muslim community were very appreciative of his efforts. His dedication to this work was outstanding, and his professionalism went a long way to restoring our community’s sense of safety and trust in Police.

“He continues to be an integral part of Operation Whakahaumanu and should be commended for his values, manaakitanga, and tautoko he provided to a community in one of their greatest times of need.”