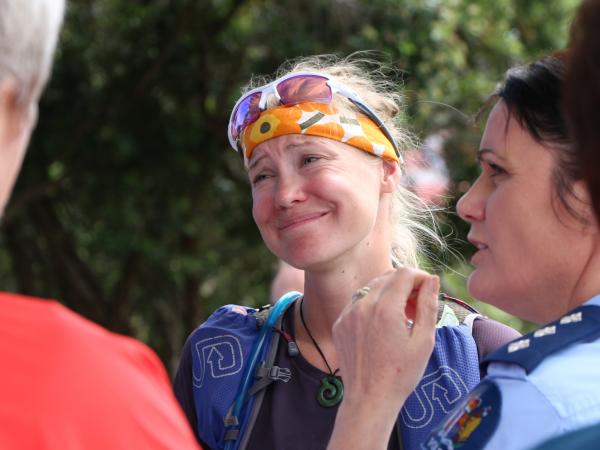 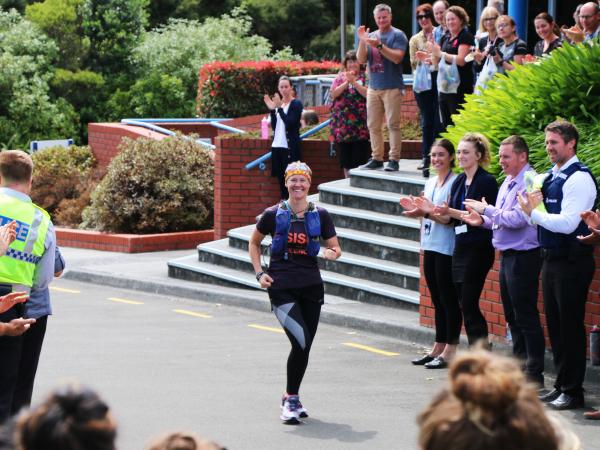 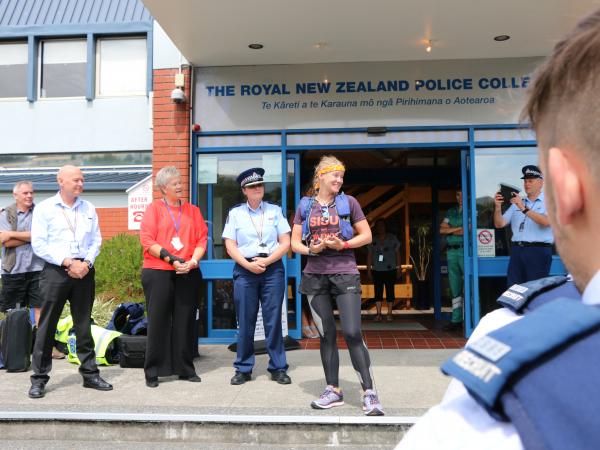 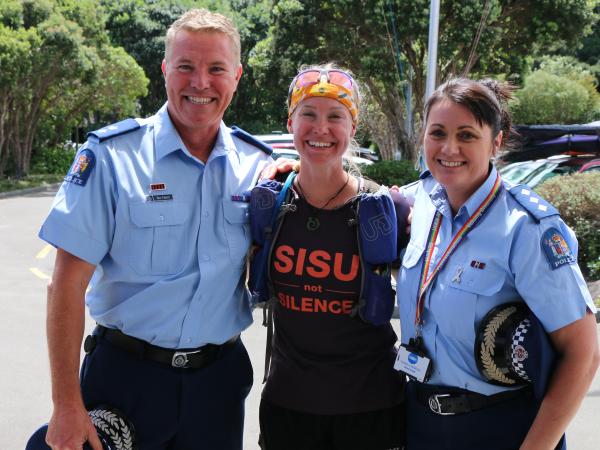 If you hear the word ‘overcomer’ being used, thank the remarkable Emilia Lahti.

Emilia, a Finnish psychology researcher, visited the Royal New Zealand Police College (RNZPC) on Friday, on day 23 of her 50-day mission to run the length of New Zealand to change the way we think about family harm.

A crowd of recruits, college staff and others – including family harm specialists from around New Zealand who were at the RNZPC for a training course – cheered and applauded as Emilia ran up the driveway.

She spoke to those gathered outside then gave an impromptu talk to the specialists in their classroom.

Emilia told her own story of escape from a violent relationship and her study for a PhD in Psychology encompassing the ancient Finnish concept of Sisu, or attainment of courage and determination through adversity.

Later she founded the global not-for-profit organisation Sisu Not Silence to counter the stigma sometimes attached to victims who overcame abuse.

She chose New Zealand for her run because of the country’s high rates of family harm – and because of a dream. “I actually dreamed I was running through a beautiful green country and I knew it was New Zealand, my spiritual home,” she said.

Much of what she said had real resonance. She refers to her status as an ‘overcomer’ – not victim (too negative) or survivor (“Life isn’t just about survival”).

She is keen to change the perception of family harm victims – why is it, she asks, that victims of street violence get total support and sympathy but in cases of partner or family violence the spoken or unspoken question remains ‘Why did you stay?’

She spoke of post-traumatic growth, through which overcomers can find a new direction, strength and positivity. She spoke of the need to strive for more than non-violence, to demonstrate ‘active compassion’ to help those rendered unable to help themselves.

She said work had to be done to understand why people become abusers. “As they say, hurt people hurt people”.

She was visibly moved when Sergeant Ed Baker, a Family Harm Coordinator from Southern District, gave a karakia on the theme of aroha. It was about more than just love, he said, it was about caring for people.

“Aroha – active compassion,” said Emilia. “When we join hands and hearts across the world so much can happen – I’m from a different culture but I feel like I’m at home here.”

Safer Whanau Business Lead Inspector Bronwyn Marshall says after hearing from Emilia, many course participants commented on the common themes of their and her thinking.

“Quite a few said that was perfect, that she was speaking the same language we’ve been speaking all week.”

National Manager Prevention Superintendent Eric Tibbott says it was a privilege to connect with “such an inspirational, wonderful, caring and compassionate person”.

“Emilia’s story as an ‘overcomer’ resonates with our own journey supported through Safer Whanau,” he says.

“Enabling our staff by way of training, technology and partnerships to provide exceptional service to those in need, making New Zealanders Be Safe Feel Safe. We wish Emilia well on her continuing journey across the North Island.”

Along her route, Emilia is stopping in 15 towns and cities for presentations and talks. The remaining schedule is as follows: