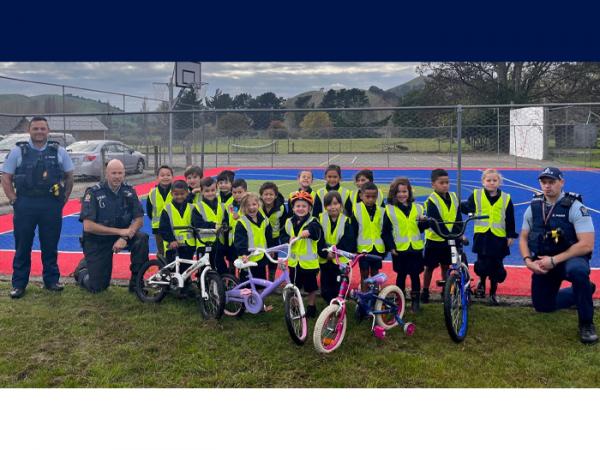 For nearly three years, a Whanganui Police bicycle initiative has been equipping children and young people with bicycles, building bonds and teaching them new skills.

In September 2020, Whanganui Dog Handler Senior Constable Jason Page created an initiative where he and his colleagues give bicycles destined for disposal a new lease on life, then give them to children and parents who would benefit from some support and positive Police engagement.

Over the years, Jason has also received generous donations of bicycles and parts from colleagues, businesses and the wider community.

In recent months, he found himself in a situation where he had heaps of bicycles for primary school-aged children but wasn’t receiving many requests for them.

“I contacted some of our local Iwi Liaison staff, Sergeants Peta Pehi and Anna Reti, about donating some bicycles to schools,” he says.

“Peta contacted Upokongaro School and spoke with their principal who jumped at the chance to receive some bikes for the kids."

The helmets were sourced through a mix of donations from the local Blue Light and The Warehouse. All the bikes have had repairs or been serviced.

“We were warmly welcomed to the school and the kids sung their school song to us,” says Jason.

“I told them the name of my project which is Paihikara hei piki Te Ora - Bikes to promote health and wellbeing - and why they were receiving the bikes.

“We have now formed an ongoing and positive relationship with Upokongaro school, and I have offered to return and repair the bicycles when needed.”

The visit ended with a request for a dog visit which will happen later this year.

“There were lots of smiling faces from both the kids and teachers – it was awesome to see,” says Jason.

“My aim is to also donate some to a school up the Whanganui River that our Dog Section visited last year. It’s amazing how something like a bicycle can have an enduring positive effect on the kids, their family, and schools.”