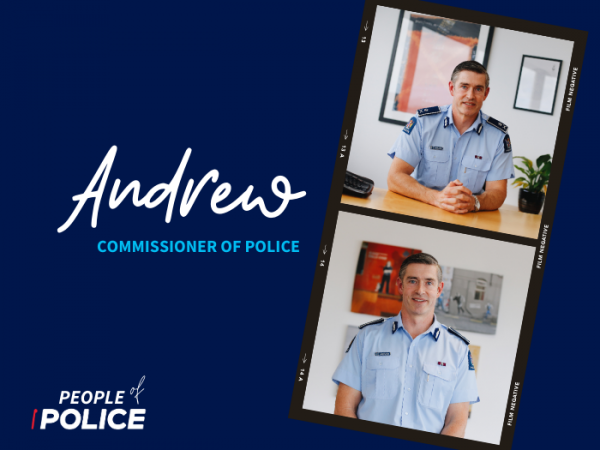 Inspired by the Humans of New York photoblog, we’d like to introduce you to People of Police - a series of portraits and biographies showcasing some of the incredible stories and experience of people throughout our organisation – both sworn and non-constabulary staff.

"I’ve been with New Zealand Police nearly 25 years. I’ve had a fantastic and varied career in the organisation, with roles ranging through frontline policing, investigations, the undercover programme, armed offenders squad and then a range of leadership positions.

"Not long after I joined Police, I decided that I wanted to pursue law – I had seen a homicide trial being prosecuted and thought, “I want to do that!”.

"I did study law while working in the CIB and left Police for a year to be a Crown prosecutor in Auckland. However, I found the courtroom very sterile compared to policing, and saw the opportunity to make a bigger difference by taking on leadership roles within Police.

"I studied for a Master of Public Management, which stood me in good stead as I took on a range of leadership opportunities, including Area Commander Auckland Central and District Commander Southern (covering Otago and Southland).

"I’ve had the opportunity to see and experience many things in my time with Police, but nothing will stick with me like my first couple of weeks in the job in Mangere, South Auckland.

"Coming from a privileged background, it was a huge eye-opener for me to realise the massive disadvantage that so many experience. Seeing the connection between that disadvantage and poor outcomes has shaped, and continues to shape, the way I think about Police’s role in the community.

"We are blessed to live in such an amazing country and I’m very proud of the contribution that Police makes to how and who we are as a nation.

"Like so many others within Police, I joined to make a difference, and I cannot think of a more meaningful opportunity to do that than in the role I presently hold.

"We are rightly subjected to a high level of scrutiny, but we also enjoy the trust of many. My goal is that we will bring to life the idea of ‘policing by consent’.

"Our communities will be safest when communities are able to take ownership of their own safety and wellbeing. Our role is to have such a strong connection and relationship with our communities that we can enable that to occur."

Next
People of Police: Martha