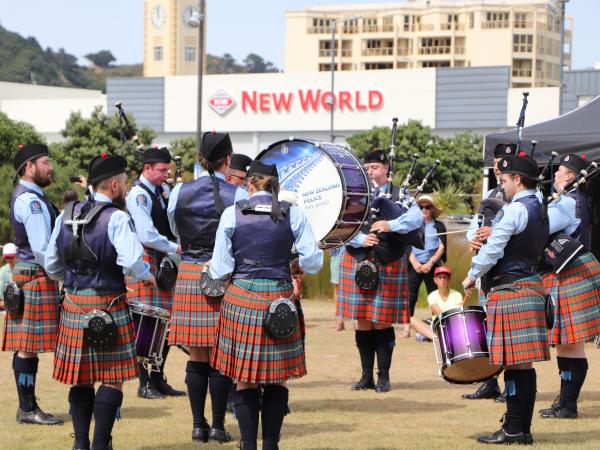 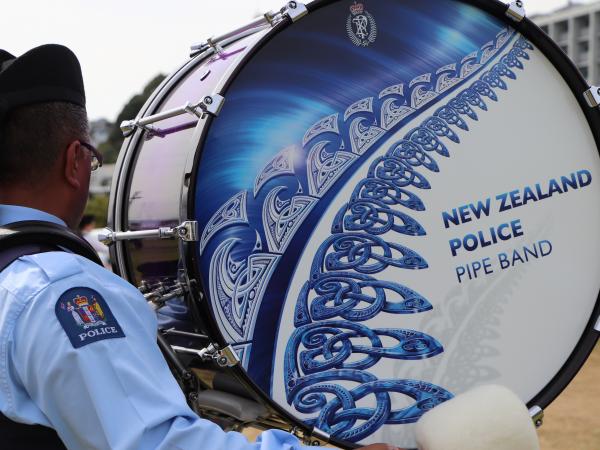 The New Zealand Police Pipe Band sets out this weekend to cement its position among the country’s elite.

On Friday and Saturday (13-14 March) the band is taking part in the 2020 National Pipe Band Championships at the Queens Park Cricket Grounds in Invercargill – appropriately deep in New Zealand Scots country.

In 2018 in Rotorua the band emerged as national champions for the eighth time since 1992.

Last year in Dunedin they missed out to Canterbury Caledonian Society, despite coming first in March, Strathspey and Reel (MSR) and Street March – two of the many areas in which they are judged.

It was formed in 1936 as the Wellington Police Highland Pipe Band and, as well as showcasing the best in piping and drumming, has a role in generating goodwill and representing Police on local, national and international stages.

It also performs at events such as police parades and ceremonies, and provides a lone piper when required for Remembrance Day services and police funerals.

Members wear McLeod tartan to commemorate those we have lost - Constable Neil McLeod, shot dead in 1890, was the first New Zealand Police officer slain in the course of duty.

The band travels internationally to compete and also performs locally at community events. Recently a reduced contingent turned out for Pipes in the Park, at Waitangi Park, Wellington, where they competed in a mini-band contest and played a rousing MSR.

"Pipes in the Park and other events like it are a great way to get the whole family involved and interested,” says Drum Major Andrae Peipei.

"It was a nice family day out, which included pipe band competition, Highland dancing, Scottish country dancing and at this event there was even a bouncy (highland?) castle.

"We had fewer of our band competing, purely because it was a local and mini band event.”

As Drum Major, Andrae is responsible for the drill, deportment and commands for street marches. He’s coming up to his 15th year with the band.

This week’s competition is a bit of a homecoming for Andrae. “Previous to this I was the Bass Drummer for (as it was known then) the City of Invercargill Caledonian Pipe Band,” he says.

"My cousin Kenneth Stevens was a side drummer in the Tuatapere Pipe Band which always stuck with me and the rest is history – I was hooked.”

To join the New Zealand Police Pipe Band, members must really be at the top of their game - grade one is the elite level.

The skill required of the pipers and drummers has increased over time, placing more time commitments on practising at home and attending band activities. This has inevitably made it difficult for busy full-time constabulary staff to commit themselves, though previously members have included Police Executive members, CIB and commissioned officers.

There is a strong pipe band tradition in Police. The Auckland Police Pipe Band, established in 1945, is also highly active at public events, police ceremonies and grade three competitions at home and overseas.

You can keep up with the New Zealand Police and Auckland Police pipe bands through their Facebook pages - follow the links below this short video of the band's appearance at Pipes in the Park:

Best wishes to both bands this competition season.

Previous
Flying high with Eagle
Next
The latest of the greatest