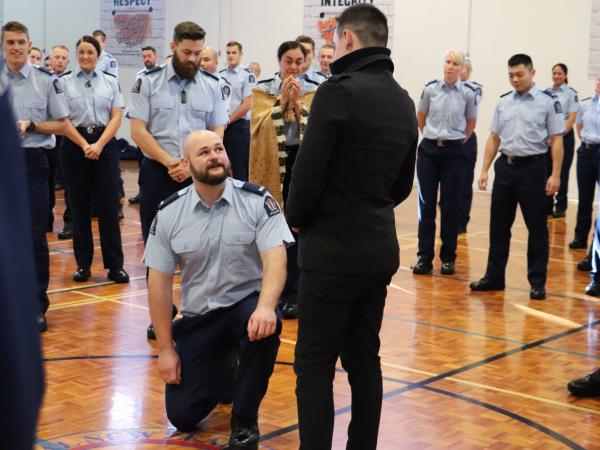 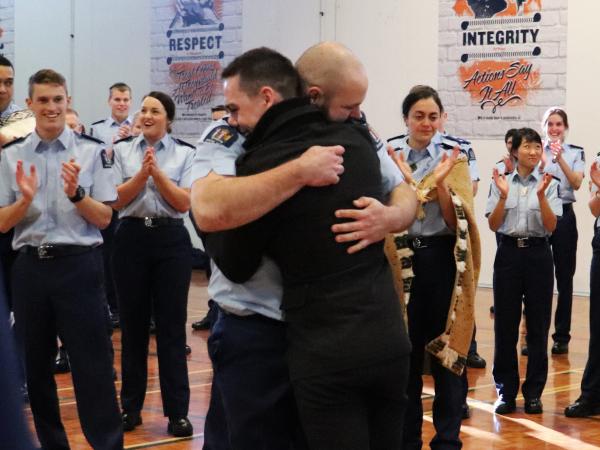 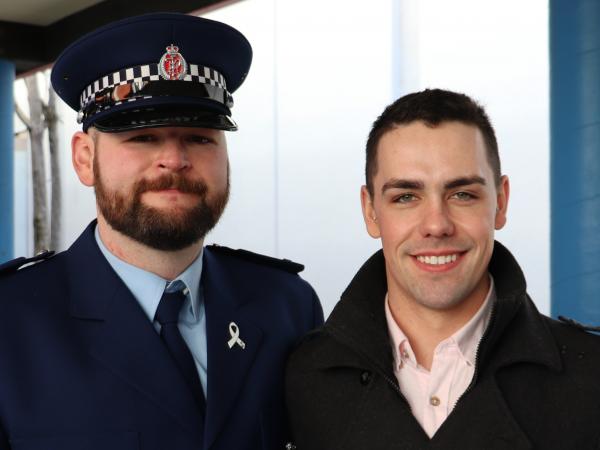 Home > News > Ten One Magazine > A proposal out of the blue

Normally he’s the reserved one, but yesterday Constable Erik Meechan chose the biggest stage available for the biggest gesture of his life.

As the graduating members of Wing 315 finished a thunderous haka – the last task of their initial training at the Royal New Zealand Police College – Erik stepped forward.

As winner of the Commissioner’s Award for Leadership, he had already stood in front of his 77 wingmates and hundreds of their family members and friends to give a speech. This time there weren’t so many words, but they couldn’t have meant more.

“Could Matty Judd please come forward?” said Eric. When a surprised Matty – Erik’s partner for the past five years – stepped out of the audience, Erik dropped to one knee and proposed.

The answer was yes.

There were tears, hugs, photos, more tears, more hugs, enthusiastic applause and loud cheering. Commissioner Mike Bush and Police Minister Stuart Nash were among the first to offer their congratulations. It was definitely a first.

“I just wanted it to be a bit special, a bit different,” says Erik, who is being deployed to Porirua. “That’s a goal achieved.

“My usual style would be to have done it at home while we were watching a movie or something but graduation is a very special event that means a lot to us.”

Erik says he and Matty have talked about marriage in the five years they have been together, after meeting through friends.

“We’ve talked about it for a while but it’s one of those things that will always be a surprise,” says Matty. “He’s normally very reserved – I’m much more likely to do something extravagant.

“I think he wanted to do something extravagant that I would appreciate. And I did.”

Erik maintains he was more nervous about making his speech than baring his soul in front of several hundred people including the Commissioner and Minister of Police. “I thought if I was going to make a speech, I might as well go for it.”

Commissioner Bush says the proposal – and the supportive reception in the packed RNZPC gym – showed how Police culture embraced the diversity of modern New Zealand.

“It was just awesome,” he says. “The fact that Erik felt so safe and supported in that environment was a fantastic demonstration of what our core value of Valuing Diversity is all about. I wish Eric and Matty all the very best for the future.”