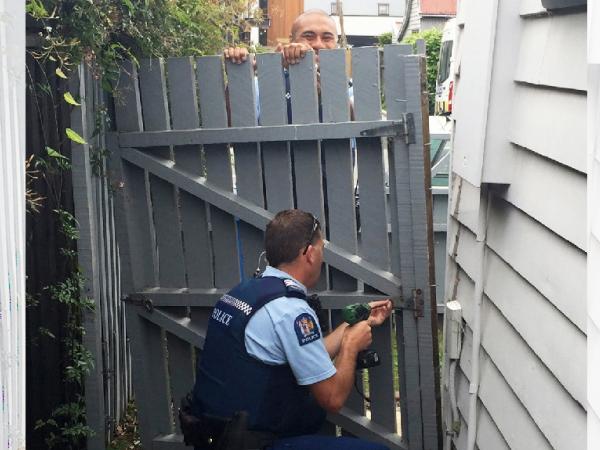 When a terrified woman called 111 to report an intruder on her property, Christchurch’s Public Safety Unit 3 really nailed the job.

After arresting the burglar and returning the stolen property, the unit went back the following day to fix a gate damaged by the fleeing offender.

The team was called out just after 10pm on Friday (17 November) when a householder in central Christchurch reported a stranger was knocking on her door and she was too scared to answer.

Sergeant Paul Robertson, PSU3 supervisor, says as they headed for the address the situation got more serious, with the householder hearing the person’s footsteps heading to the back of her property as she spoke on the phone.

The woman fled the house and the intruder got in. PSU3 arrived within a few minutes of the call and spotted a man running away around 500 metres from the address.

The suspect was detained and initially denied having been in the house. “We searched him and found a pry bar,” says Paul. “He said he used it for doing over cars, but hadn’t done any that night.”

The search also turned up the victim’s iPod and boombox, and $240 Christmas cash. “The victim could even tell us the denomination of the notes.”

Paul says the job reflected the joy of being able to respond in numbers to a call.

“Within one and a half hours we had him in the can for burglary – all the gear he had on him came from her house.

“The file was done, statements were taken, the photos and the forensics were done. He couldn’t have given us any more evidence unless we’d caught him in the house.”

As the offender climbed the gate to get away from the property, one of the uprights had been pulled from the wall. Paul told the victim they would return to fix it and the following morning all eight PSU members did just that, with Paul bringing his own toolbox.

“It was an easy 15-minute fix but the householder was stoked – I don’t think she could believe it,” says Paul.

He says the real story lies in the unit’s work the previous night. “It was a good catch, and the processing of the offender and the tying in of all the evidence was great work by my staff.”