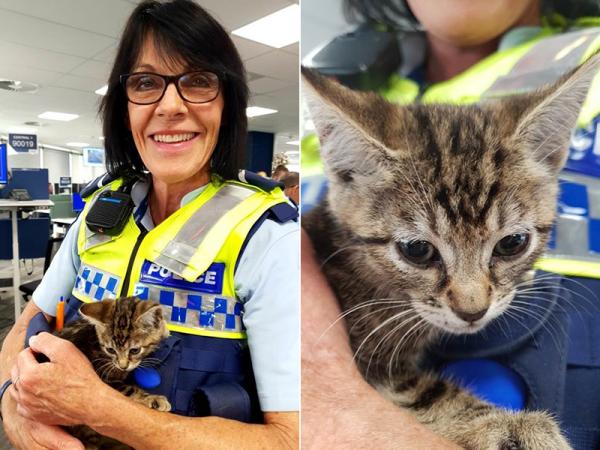 Just before 12.30pm on Sunday, Police received a number of calls from members of the public about a kitten on the motorway near the centre barrier, northbound, between Greenlane and Market Road.

The tiny tabby’s colouring blended into the road, so it was nearly impossible for traffic camera operators to pick up.

Police stopped motorists to attempt to catch the kitten, but to no avail.

Fortunately, it appeared to have some road sense, as it was travelling in the direction of the traffic – making the job slightly easier for the kitten-wranglers.

After evading capture for nearly 40 minutes, the kitten was safely taken into custody around 1.10pm, thanks to the lightning-quick reflexes of Constable Simon Russell.

The kitten had jumped into the engine bay of a member of the public's stopped vehicle.

Constable Russell asked the driver of the vehicle to drive forward very slowly... Quick as a flash the kitten jumped out, heading southbound towards Constable Russell’s car.

He opened his door and managed to swoop the kitten up.

Senior Constable Sherryl Pearce arrived a short time later and secured the kitten in a box, intending to go to the SPCA.

But before she did, she decided to pop into our Northern Communications Centre, where an emergency call-taker said she’d love to take the kitten home – so the SPCA trip was cancelled.

And it’s not the first time this call-taker’s taken home a feline friend rescued from the motorway.

Following a vet check, the kitten’s going to be named Poppy if it’s a girl, and Diego (after Diego Rivera, the artist) if it's a boy.